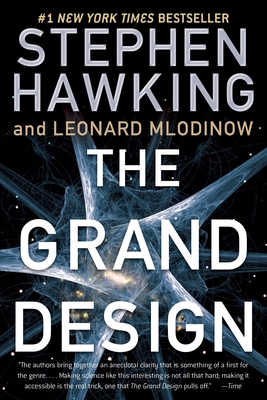 When and how did the universe begin? Why are we here? What is the nature of reality? Is the apparent “grand design” of our universe evidence of a benevolent creator who set things in motion—or does science offer another explanation? In this startling and lavishly illustrated book, Stephen Hawking and Leonard Mlodinow present the most recent scientific thinking about these and other abiding mysteries of the universe, in nontechnical language marked by brilliance and simplicity.

According to quantum theory, the cosmos does not have just a single existence or history. The authors explain that we ourselves are the product of quantum fluctuations in the early universe, and show how quantum theory predicts the “multiverse”—the idea that ours is just one of many universes that appeared spontaneously out of nothing, each with different laws of nature. They conclude with a riveting assessment of M-theory, an explanation of the laws governing our universe that is currently the only viable candidate for a “theory of everything”: the unified theory that Einstein was looking for, which, if confirmed, would represent the ultimate triumph of human reason.

Leonard Mlodinow received his doctorate in theoretical physics from the University of California at Berkeley, and teaches at Caltech. He is the New York Times bestselling author of The Drunkard’s Walk: How Randomness Rules our Lives, Subliminal: How Your Unconscious Mind Rules Your Behavior, War of the Worldviews: Science versus Spirituality (with Deepak Chopra), Feynman’s Rainbow: A Search for Beauty in Physics and in Life, and Euclid’s Window: The Story of Geometry from Parallel Lines to Hyperspace. He also wrote for Star Trek: The Next Generation. He lives in South Pasadena, California.

“In this short and sprightly book . . . Hawking and Mlodinow take the reader through a whirlwind tour of fundamental physics and cosmology.”—The Wall Street Journal

“Fascinating . . . a wealth of ideas [that] leave us with a clearer understanding of modern physics in all its invigorating complexity.”—Los Angeles Times

“The authors bring to the field an anecdotal clarity that is something of a first for this genre. . . . Making science like this interesting is not all that hard; making it accessible is the real trick.”—Time

“Provocative pop science, an exploration of the latest thinking about the origins of our universe.”—The New York Times

“Introduces the reader to topics at the frontier of theoretical physics . . . more clearly for general readers than I have seen before.”—Steven Weinberg, The New York Review of Books