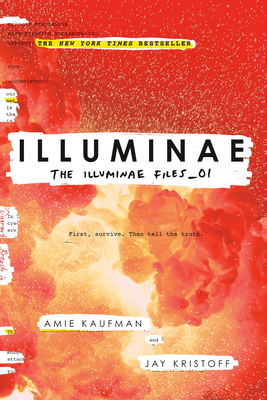 By Amie Kaufman, Jay Kristoff
$12.99
On Our Shelves Now

“It certainly filled the Battlestar Galactica–shaped hole in my heart.” —Victoria Aveyard, bestselling author of The Red Queen

Read the New York Times bestselling blockbuster that critics are calling “out-of-this-world awesome.” The first in an epic sci-fi series unlike anything else out there.

Kady thought breaking up with Ezra was the worst thing she’d ever been through. That was before her planet was invaded. Now, with enemy fire raining down on them, Kady and Ezra are forced to fight their way onto one of the evacuating craft, with an enemy warship in hot pursuit.

But the warship could be the least of their problems. A deadly plague has broken out and is mutating, with terrifying results; the fleet’s AI, which should be protecting them, may actually be their biggest threat; and nobody in charge will say what’s really going on. As Kady plunges into a web of data hacking to get to the truth, it’s clear only one person can help her bring it all to light: Ezra.

Told through a fascinating dossier of hacked documents—including emails, schematics, military files, IMs, medical reports, interviews, and more—Illuminae is the first book in a heart-stopping, high-octane trilogy about lives interrupted, the price of truth, and the courage of everyday heroes.

“Brace yourself, because you’re about to be immersed in a mindscape that you’ll never want to leave.” —Marie Lu, author of the bestselling Legend series

New York Times bestselling co-authors Amie Kaufman and Jay Kristoff met thanks to international taxation law and were shocked to discover they share a love of blowing things up and breaking hearts. Their first collaboration resulted in the international bestseller Illuminae. Separately, Amie is also the co-author of the bestselling Starbound trilogy, while Jay is the award-winning author of the Lotus War trilogy. They live with their respective spouses in Melbourne, Australia. You can learn more about Amie and Jay at amiekaufman.com and jaykristoff.com, and follow them on Twitter at @AmieKaufman and @MisterKristoff.

“It certainly filled the Battlestar Galactica–shaped hole in my heart.”—Victoria Aveyard, bestselling author of The Red Queen

“This is one of those rare books that will truly keep your heart pounding.”—Beth Revis, bestselling author of Across the Universe