The Case of the Perilous Palace (The Wollstonecraft Detective Agency, Book 4) (Hardcover) 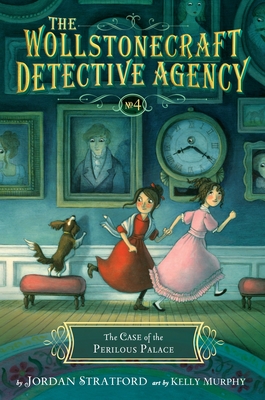 This is book number 4 in the The Wollstonecraft Detective Agency series.

The history-mystery-science series continues as the Wollstonecraft Detectives--Ada Byron Lovelace and Mary Shelley--take on a case by royal request.

Ada's imperious grandmother has absolutely shut the Wollstonecraft Detective Agency down--until they get a case from a princess, that is.

The princess Alexandrina Victoria, age 9 (who will grow up to be Queeen Victoria), is the most closely watched girl in England. She is never alone. Every morsel she eats is catalogued. Every visitor overseen. Every move noted down. She has but one thing of her own--a sketchbook she uses as a secret diary, where she records her private thoughts in code. But now, somehow, that sketchbook has disappeared.

And so the princess enlists Ada and Mary to figure out what has happened to the sketchbook without arousing the suspicions of her minders. A most clandestine case indeed! One that will involve breaking into Kensington Palace and uncovering a host of surprising royal secrets...

This funny, Christmas-time romp of a caper will delight history and mystery fans alike.

JORDAN STRATFORD is a producer, author, and screenwriter. Stratford first launched the Wollstonecraft Detective Agency series on Kickstarter and in under a month had gained nearly 3,000 backers--clearly there was an eager audience. You can find him on the Web at JordanStratfordBooks.com and on Twitter @JordanStratford.

KELLY MURPHY is an accomplished picture-book and chapter-book author and artist. She is a graduate of the Rhode Island School of Design, where she now serves on the faculty. Kelly lives with her husband in New England. You can read more about her work at kelmurphy.com.