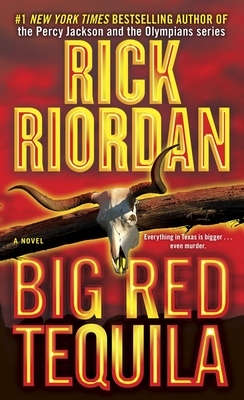 This is book number 1 in the Tres Navarre series.

Everything in Texas is bigger . . . even murder.

Jackson “Tres” Navarre and his enchilada-eating cat, Robert Johnson, pull into San Antonio and find nothing waiting but trouble. Ten years ago Navarre left town and the memory of his father’s murder behind him. Now he’s back, looking for answers. Yet the more Tres digs, trying to put his suspicions to rest, the fresher the decade-old crime looks: Mafia connections, construction site payoffs, and slick politicians’ games all conspire to ruin his homecoming. It’s obvious Tres has stirred up a hornet’s nest of trouble. He gets attacked, shot at, run over by a big blue Thunderbird—and his old girlfriend, the one he wants back, is missing. Tres has to rescue the woman, nail his father’s murderer, and get the hell out of Dodge before mob-style Texas justice catches up to him. The chances of staying alive looked better for the defenders of the Alamo.

“Riordan writes so well about the people and topography of his Texas hometown that he quickly marks the territory as his own.”—Chicago Tribune

Rick Riordan is the author of the #1 New York Times bestselling Percy Jackson and the Olympians series and the Heroes of Olympus series for children and the multi-award-winning Tres Navarre mystery series for adults. For fifteen years, Riordan taught English and history at public and private middle schools in the San Francisco Bay Area and in Texas. In 2002, Saint Mary’s Hall honored him with the school’s first Master Teacher Award. His adult fiction has won the top three national awards in the mystery genre—the Edgar, the Anthony, and the Shamus. His first Percy Jackson book, The Lightning Thief, was a New York Times Notable Book for 2005. The Sea of Monsters was a Child Magazine Best Book for Children for 2006 and a national bestseller. The third title, The Titan’s Curse, made the series a #1 New York Times bestseller, and the fourth title, The Battle of the Labyrinth, had a first printing of one million copies. The series concluded with The Last Olympian, which was also a major national bestseller.  Rick Riordan now writes full-time. He lives in Boston with his wife and two sons.