Forty Signs of Rain (Science in the Capital #1) (Mass Market) 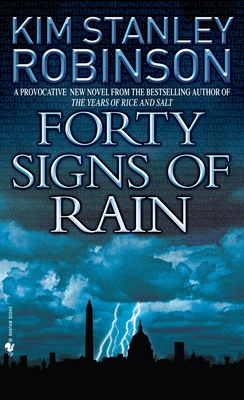 The bestselling author of the classic Mars trilogy and The Years of Rice and Salt presents a riveting new trilogy of cutting-edge science, international politics, and the real-life ramifications of global warming as they are played out in our nation’s capital—and in the daily lives of those at the center of the action. Hauntingly yet humorously realistic, here is a novel of the near future that is inspired by scientific facts already making headlines.

When the Arctic ice pack was first measured in the 1950s, it averaged thirty feet thick in midwinter. By the end of the century it was down to fifteen. One August the ice broke.

The next year the breakup started in July. The third year it began in May.

That was last year.

It’s a muggy summer in Washington, D.C., as Senate environmental staffer Charlie Quibler and his scientist wife, Anna, work to call attention to the growing crisis of global warming. But as these everyday heroes fight to align the awesome forces of nature with the extraordinary march of technology, fate puts an unusual twist on their efforts—one that will place them at the heart of an unavoidable storm.

Kim Stanley Robinson is a winner of the Hugo, Nebula, and Locus awards. He is the author of ten previous books, including the bestselling Mars trilogy and The Years of Rice and Salt, named one of the best science fiction novels of 2002 by Book magazine. He lives in Davis, California.