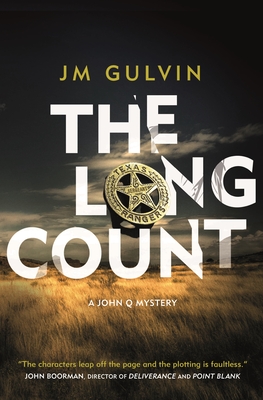 This is book number 1 in the John Q Mystery series.

"The detail is unerring ... and this magisterial grasp of time and place lends the story vivid veracity. The characters leap off the page and the plotting is faultless." -- John Boorman, Director of Point Blank and Deliverance
"Gulvin's narrative has a distinctly cinematic feel, and his setting--the windswept plains and desolate highways of Texas--lends an eeriness that lingers throughout. The final twist is a doozy, and the devil is in the story's cleverly seeded details." -- Publisher's Weekly With a gun on each hip and godson to the Ranger that took down Bonnie and Clyde, 36-year-old John Quarrie is Old School West with old west values, the very embodiment of the "One Riot - One Ranger" epithet. It's 1967, and, with students across the state protesting the Vietnam War, the Texas Rangers are stretched pretty thin. A single father, Quarrie lives on a ranch in the Texas panhandle. Grabbling for catfish at the site of a train wreck on Memorial Day, he and his son come across the skull of a young boy. At first, the discovery seems to have no bearing on the suicide of a fellow war vet that John Q is called on to investigate. But what starts out as a single line of inquiry becomes a desperate race to find a killer who has a secret as dark and tragic as any cop is ever going to uncover.

JM Gulvin divides his time between Wales and the western United States. He is the author of many previous novels, as well as Ewan McGregor and Charley Boorman's bestselling travel book Long Way Down. The Long Count is his first John Q mystery. He is married and has two daughters.