The Anastasia Trials in the Court of Women (Paperback) 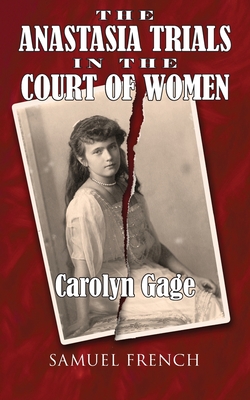 A play with intense audience participation Engrossing, controversial courtroom drama, where the audience must serve as judge and jury, deciding motions and verdict, in a case against the five women who betrayed the Grand Duchess Anastasia Romanov, the last surviving daughter of the Tsar of Russia. Complex ethical questions on a set of folding chairs.

The Anastasia Trials is a farcical, but profoundly engaging excursion into the hidden world of ethics for women who are both survivors and perpetrators of abuse toward women. The format is a play-within-a-play, where a radical feminist theatre company comes together in order to perform a courtroom drama. The play is shaped by the audience decisions to overrule or sustain the attorneys' motions, and every night's audience sees a different play.

In presenting the play, the Emma Goldman Theatre Brigade has instituted a new system to insure equal opportunity for the actors: a lottery. As the women assemble to draw their roles from the hat for the evening's performance, sisterhood is put to the test. The performance itself is a conspiracy trial against five women accused of denying a woman her identity. The plaintiff is none other than Anastasia Romanov, sole survivor of the massacre of the Russian imperial family in 1918.

"I am constantly amazed at Carolyn's ability to make complex social issues not only accessible but also irresistibly fascinating... the play... The Anastasia Trials ] touched us, made us laugh and gripped us in a white-knuckle intensity usually found only in Hitchcock films." --R.J. McComish, Literary Manager of the Portland Stage Company, Portland, Maine.

"Each performance could potentially have a different result and many students saw every performance just so they could see how the show ended."--At Oldfields, Glencoe, MD.