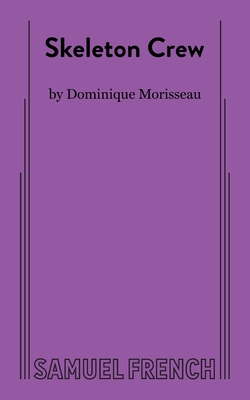 At the start of the Great Recession, one of the last auto stamping plants in Detroit is on shaky ground. Each of the workers have to make choices on how to move forward if their plant goes under. Shanita has to decide how she'll support herself and her unborn child, Faye has to decide how and where she'll live, and Dez has to figure out how to make his ambitious dreams a reality. Power dynamics shift as their manager Reggie is torn between doing right by his work family, and by the re.

Dominique Morisseau, writer and actress, is an alumnus of the Public Theater Emerging Writer’s Group, the Women’s Project Playwrights Lab, and Lark Playwrights’ Workshop. Among her playwriting credits are: Detroit ’67 (Public Theater; Classical Theatre of Harlem/NBT; Northlight Theatre), Sunset Baby (Labyrinth Theater Co – NYC; Gate Theater- London), and Follow Me To Nellie’s (O’Neill; Premiere Stages). Her produced one-acts include: Third Grade (Fire This Time Festival); Black at Michigan (Cherry Lane); Socks, Roses Are Played Out and Love and Nappiness (Center Stage; ATH); love.lies.liberation (The NewGroup), Bumrush (Hip Hop Theater Festival) and The Masterpiece (Harlem9/HSA). Dominique is currently developing a 3-play cycle on her hometown of Detroit, entitled “The Detroit Projects.” Detroit ’67 is the first of the series. The second play, Paradise Blue, was developed with Voice and Vision, the Hansberry Project at ACT, New York Theatre Workshop, McCarter Theatre, Williamstown Theatre Festival, and the Public Theater. Dominique’s work has also been published in NY Times bestseller “Chicken Soup for the African American Soul” and in the Harlem-based literary journal “Signifyin’ Harlem.” She is a Jane Chambers Playwriting Award honoree, a two-time NAACP Image Award recipient, a runner-up for the Princess Grace Award, a recipient of the Elizabeth George commission from South Coast Rep, a commendation honoree for the Primus Prize by the American Theatre Critics Association, winner of the Barrie and Bernice Stavis Playwriting Award, the Weissberger Award for Playwriting, the U of M – Detroit Center Emerging Leader Award, a Lark/PoNY (Playwrights of New York) Fellow, and a recent recipient of the Edward M. Kennedy Prize for Drama. She is an artist that believes wholeheartedly in the power and strength of community.

CRITIC'S PICK! "Clifford Odetts' dramas come to mind and so does the great Pittsburgh cycle of August Wilson. But "Skeleton Crew" is squarely in the tradition of Arthur Miller...A deeply moral and deeply American play." - The New York Times

"Morrisseau has heart...Her rough-edged dialogue even has a touch of the street poet." - Variety

"Like Lorraine Hansberry and August Wilson before her, Morisseau creates characters who don't merely speak, they sing with the vernacular of their community. Rarely has dialogue ever felt so much like eavesdropping on an actual conversation." - TheatreMania