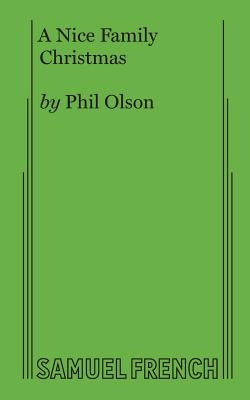 It's Christmas Eve, and a young newspaper reporter on the brink of being fired has been assigned a last-chance story about a typical family Christmas - his family's Christmas. He goes home to his recently widowed mother, his crazy uncle, his eccentric grandmother, and his battling siblings and their neurotic spouses, who provide no shortage of material. One by one, we learn each family member's secrets, problems, and dysfunctions, and when they learn that he's wr.

Phil Olson grew up in Edina, Minnesota, home of the first indoor mall. His father’s grandparents came over from Norway and homesteaded a farm north of Fargo, North Dakota. His mother’s grandparents also came over from Norway and ended up in Virginia, Minnesota; the iron range. Mr. Olson played varsity football, basketball, and track at Edina East High School, winning the Minnesota State High School Track Meet in the discus. Mr. Olson was recently inducted into the Edina Athletic Hall of Fame. After high school, he went on to Dartmouth College where he majored in mathematics, was All Ivy, All New England, and All East in Track, and played tight end on the Ivy League Championship Football team. After graduating from Dartmouth, Mr. Olson tried out for the Chicago Bears. After his "summer with the Bears," he went on to receive an MBA from The University of Chicago and pursued a business career while writing stage and screenplays. Phil currently lives in Los Angeles where he writes and produces plays. He has 11 published plays that have had over 200 productions around the U.S. and Canada. Six of his plays are published by Samuel French including, Don't Hug Me, A Don't Hug Me Christmas Carol, A Don't Hug Me County Fair, Don't Hug Me I'm Pregnant, Polyester The Musical, and A Nice Family Gathering. Mr. Olson has written five award-winning plays set in small towns in Minnesota. As a script doctor, he’s re-written three movies that have been produced, as well as thirteen original screenplays. He's also sold two screenplays.

“From the first opening lines to the surprising joyous conclusion the entire audience was in almost constant laughter!” / LA Post-Examiner

“Critics Pick! 5 out of 5 stars […] It’s a howler a la Neil Simon with a laugh about every two seconds! […] Go see A Nice Family Christmas!” / BroadwayWorld.com