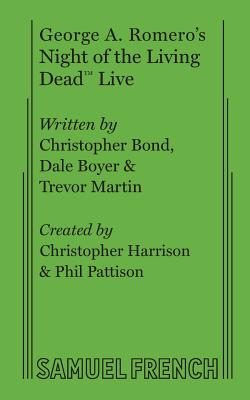 Six strangers, a lonely farmhouse, surrounded by brain-eating zombies - what could go wrong? Night of the Living Dead(TM) Live is a fun and hilarious re-imagining of George A. Romero's legendary classic. Set in 1968 and presented in all black and white, it literally feels like the film has been brought to life and placed onstage. The play lovingly examines the movie itself, the period in which it was made, and the film's undying influence on the horror genre. More than just a re-creation of the's.

"Spooky, sophisitcated, and silly in equal measures [...] so recommended it hurts." - Fangoria Magazine

"Night of the Living Dead Live reveals itself to be more than an adaptation. It's a devout and carefully crafted expansion of the beloved film with heaps of laughs along the way." - The Zed Word

"[...] this campy folly is a witty, smartly-imagined adaptation that should not be discounted." - The Walleye

"No surprise here as the creation of a perfect staged version is set to be an international smash success. Drag your undead butt to this show!" - Mooney on Theatre