The Wizard of Oz (RSC) (Paperback) 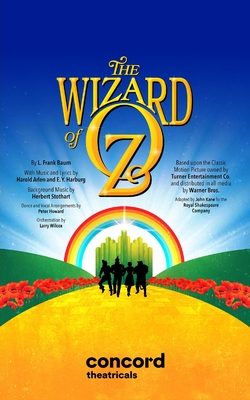 Follow the yellow brick road in this delightful stage adaptation of L. Frank Baum's beloved tale, featuring the iconic musical score from the MGM film. The timeless tale, in which young Dorothy Gale travels from Kansas over the rainbow to the magical Land of Oz, continues to thrill audiences worldwide.

Professional Artwork Available for Your Production of The Wizard of Oz (R.S.C. 1987)

Concord Theatricals has collaborated with Subplot Studio to create high-quality artwork that complies with your license. Promoting your show has never been easier Learn more at Subplot Studio.

There are two full-length versions of The Wizard of Oz: MUNY and RSC. Both include the songs "Over The Rainbow," "Munchkinland (Ding Dong The Witch Is Dead)," "If I Only Had A Brain/A Heart/The Nerve," "We're Off To See The Wizard (Follow The Yellow Brick Road)," "The Jitterbug," and "The Merry Old Land of Oz." The MUNY version also has "Evening Star." The RSC version also includes "Poppies (Optimistic Voices)" and "If I Were King Of The Forest."

This RSC version is a more faithful adaptation of the film. A more technically complex production, it recreates the dialogue and structure of the MGM classic nearly scene for scene, though it is adapted for live stage performance. The RSC version's musical material also provides more work for the SATB chorus and small vocal ensembles.

The MUNY Version is more theatrically conservative, employing its stage, actors, singers, dancers, and musicians in traditional ways. Using L. Frank Baum's book - and not the MGM film - as its inspiration, this version employs story and songs as elements of a classic stage musical, adding a bit more humor to the witch and her cronies. The MUNY version does not include Toto, but instead adds new characters, including: Farmhand Joe, Gloria of Oz, Lord Growlie, Tibia (the witch's skeletal assistant), two comical neighboring witches, and the Royal Army of Oz.