Sitto's Kitchen: A Treasury of Syrian Family Recipes Taught from Mother to Daughter for Over 100 Years (Paperback) 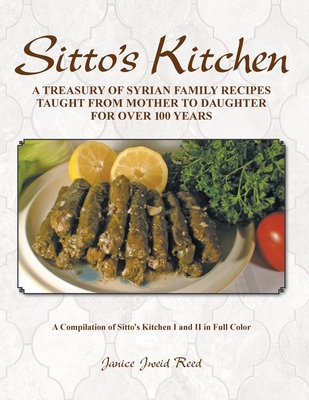 The author remembers, "In 1966, I started compiling my grandmother's recipes in a little spiral notebook. Years later, as my worn and food-stained notebook captured the fruits of my own labors, I realized these recipes were too precious to lose. They're a testament to all those cooks before me who faithfully preserved their heritage, mother to daughter, through the generations."

Sitto's Kitchen begins with a Basics chapter that will guide the reader with tips on pantry staples, cook's tools and those necessary ingredients needed to begin creating this exciting cuisine. The cookbook's recipe titles are written in both English and Arabic. A glossary of spices and herbs, an index in English and Arabic, a Where to Buy It section and photos of many of the dishes are all included with today's cooks in mind.

The next generations of young Arab cooks who long for these traditional foods will be drawn into Sitto's Kitchen. Those exploring new cuisines will find that these Middle Eastern spices and fragrant herbs will carry them to new lands. For thousands of years, the distinctive cuisine of Aleppo, Syria has relied on the freshest of vegetables, fruits and nuts of the region. The accent on these foods, spices and grain-based dishes will appeal to vegetarians as well as those wanting an authentic adventure in delicious Syrian cookery. Sitto's Kitchen is a journey in Middle Eastern cooking with no mystery, simply prepared and traditionally preserved by generations of cooks who served these humble dishes to their families with love.