The Year of the Puppy: How Dogs Become Themselves (Hardcover) 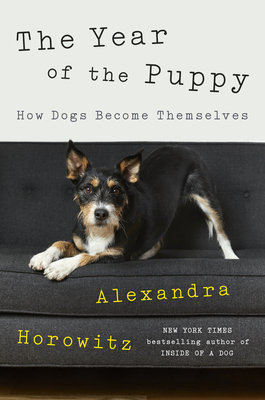 “What Mr. Rogers was to children, Alexandra Horowitz is to dogs: a wise and patient observer who seeks to intimately know a creature... Her chapters, packed with close observations about canine cognition and behavior, are mini-mood lifters." —NPR, Maureen Corrigan on Fresh Air

What is it like to be a puppy? Author of the classic Inside of a Dog, Alexandra Horowitz tries to find out, spending a year scrutinizing her puppy’s daily existence and poring over the science of early dog development

Few of us meet our dogs at Day One. The dog who will, eventually, become an integral part of our family, our constant companion and best friend, is born without us into a family of her own. A puppy's critical early development into the dog we come to know is usually missed entirely. Dog researcher Alexandra Horowitz aimed to change that with her family's new pup, Quiddity (Quid). In this scientific memoir, she charts Quid's growth from wee grub to boisterous sprite, from her birth to her first birthday.

Horowitz follows Quid's first weeks with her mother and ten roly-poly littermates, and then each week after the puppy joins her household of three humans, two large dogs, and a wary cat. She documents the social and cognitive milestones that so many of us miss in our puppies' lives, when caught up in the housetraining and behavioral training that easily overwhelms the first months of a dog's life with a new family. In focusing on training a dog to behave, we mostly miss the radical development of a puppy into themselves—through the equivalent of infancy, childhood, young adolescence, and teenager-hood.

By slowing down to observe Quid from week to week, The Year of the Puppy makes new sense of a dog's behavior in a way that is missed when the focus is only on training. Horowitz keeps a lens on the puppy's point of view—how they (begin to) see and smell the world, make meaning of it, and become an individual personality. She's there when the puppies first open their eyes, first start to recognize one another and learn about cats, sheep, and people; she sees them from their first play bows to puberty. Horowitz also draws from the ample research in the fields of dog and human development to draw analogies between a dog's first year and the growing child—and to note where they diverge. The Year of the Puppy is indispensable for anyone navigating their way through the frustrating, amusing, and ultimately delightful first year of a puppy’s life.

Alexandra Horowitz observes dogs for a living. Her research began more than two decades ago, studying dogs at play, and continues today at her Dog Cognition Lab at Barnard College. She is the author of Inside of a Dog: What Dogs See, Smell, and Know and three other books: On Looking; Being a Dog; and Our Dogs, Ourselves. She lives with her family of Homo sapiens, Canis familiaris, and Felis catus in New York City.

Praise for The Year of the Puppy:

A Publishers Weekly Best Book of 2022

"Horowitz’s goal is to think and write about dogs in a way that is distinct from usual pet-related fare about how to teach a puppy not to lunge at children and not to increase your household paper-towel budget. Instead, she aims to try to better understand a young dog, from Day One to day three hundred and sixty-five, as a being in transformation."
—Rivka Galchen, The New Yorker

"What Mr. Rogers was to children, Alexandra Horowitz is to dogs: a wise and patient observer who seeks to intimately know a creature who is fundamentally different from us adult humans. . . . Horowitz's writing is as simultaneously buoyant and precise as Quid's zest for catching tennis balls — over, and over, and over again. Her chapters, packed with close observations about canine cognition and behavior, are mini-mood lifters."
—NPR, Maureen Corrigan on Fresh Air

“Horowitz takes science writing to the next level in this stunning exploration of what the world looks like through the eyes of man’s best friend. It’s a blast to join her as she tracks a puppy’s development week by week for a year. Come for the heartwarming anecdotes about her pandemic pup Quiddity, stay for the constantly surprising takeaways.”
—Publishers Weekly, "Publisher’s Weekly Best Books of 2022"

"Equal parts science and doggy diary, this new charmer from the author of Inside of a Dog charts how our irresistible fur babies develop personality."
—People

"Horowitz (Our Dogs, Ourselves), head of Barnard College’s Dog Cognition Lab, charts the first year of a puppy’s life in this splendid dog behavior explainer. . . . Animal lovers will eat this up."
—Publishers Weekly (starred review)

"Keenly observed. . . . With her characteristic sharp eye for detail and vast knowledge of canine-related scientific research, the author expertly guides us through Quid’s critical early development. . . . This book provides a science-based, honest look at the ups and downs of raising a puppy. . . . A detailed, highly illuminating portrait of puppies and our relationships with them."
—Kirkus Reviews

"A fascinating beauty of a book that will add immensely to the world of dog research and will thrill dog owners."
—Library Journal