Travels with George: In Search of Washington and His Legacy (CD-Audio) 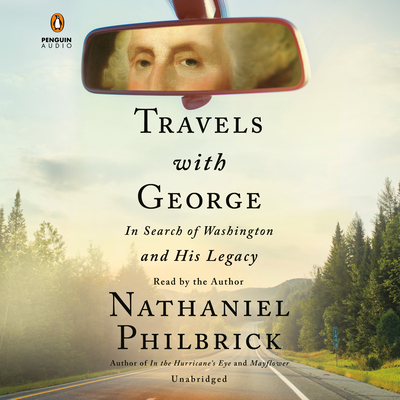 Does George Washington still matter? Bestselling author Nathaniel Philbrick argues for Washington’s unique contribution to the forging of America by retracing his journey as a new president through all thirteen former colonies, which were now an unsure nation. Travels with George marks a new first-person voice for Philbrick, weaving history and personal reflection into a single narrative.

When George Washington became president in 1789, the United States of America was still a loose and quarrelsome confederation and a tentative political experiment. Washington undertook a tour of the ex-colonies to talk to ordinary citizens about his new government, and to imbue in them the idea of being one thing—Americans.

In the fall of 2018, Nathaniel Philbrick embarked on his own journey into what Washington called “the infant woody country” to see for himself what America had become in the 229 years since. Writing in a thoughtful first person about his own adventures with his wife, Melissa, and their dog, Dora, Philbrick follows Washington’s presidential excursions: from Mount Vernon to the new capital in New York; a monthlong tour of Connecticut, Massachusetts, New Hampshire, and Rhode Island; a venture onto Long Island and eventually across Georgia, South Carolina, and North Carolina. The narrative moves smoothly between the eighteenth and twenty-first centuries as we see the country through both Washington’s and Philbrick’s eyes.

Written at a moment when America’s founding figures are under increasing scrutiny, Travels with George grapples bluntly and honestly with Washington’s legacy as a man of the people, a reluctant president, and a plantation owner who held people in slavery. At historic houses and landmarks, Philbrick reports on the reinterpretations at work as he meets reenactors, tour guides, and other keepers of history’s flame. He paints a picture of eighteenth-century America as divided and fraught as it is today, and he comes to understand how Washington compelled, enticed, stood up to, and listened to the many different people he met along the way—and how his all-consuming belief in the union helped to forge a nation.

Nathaniel Philbrick grew up in Pittsburgh, Pennsylvania, and earned a BA in English from Brown University and an MA in America Literature from Duke University, where he was a James B. Duke Fellow. He was Brown University’s first Intercollegiate All-American sailor in 1978, the same year he won the Sunfish North Americans in Barrington, Rhode Island. After working as an editor at Sailing World magazine, he wrote and edited several books about sailing, including The Passionate Sailor, Second Wind, and Yaahting: A Parody.     In 2000, Philbrick published the New York Times bestseller In the Heart of the Sea, which won the National Book Award for nonfiction. The book is the basis of the Warner Bros. motion picture Heart of the Sea, directed by Ron Howard and starring Chris Hemsworth, Cillian Murphy, Brendan Gleeson, Benjamin Walker, Ben Wishaw, and Tom Holland. The book also inspired a 2001 Dateline special on NBC as well as the 2010 two-hour PBS American Experience film Into the Deep by Ric Burns.   Philbrick’s writing has appeared in Vanity Fair, The New York Times Book Review, The Wall Street Journal, the Los Angeles Times, and the Boston Globe. He has appeared on the Today show, The Morning Show, Dateline, PBS’s American Experience, C-SPAN, and NPR. He and his wife live on Nantucket.

“Both a lighthearted travelogue and a timely exploration of Washington’s historical legacy.” —The Wall Street Journal

“Philbrick’s book addresses weighty matters but is nevertheless an enjoyable read, a fitting if unusual capstone to a trilogy on the revolution. At times, the book seems like a valedictory. The author’s many readers hope not.” —The Guardian (London)

“In Travels with George: In Search of Washington and His Legacy, his thirteenth book, Nathaniel Philbrick brings his proven gift as a narrator to this on-the-road part of Washington’s life.” —The Washington Post

“Drawing unnerving parallels to the nation’s current political landscape, the writer shows how the lessons taught by the ‘father of our country’ are still relevant today.” —Smithsonian

“This delightful book retraces the journey of George Washington across the former colonies shortly after his inauguration. It’s a meditation on our first president’s continued relevance to the American identity.” —The Christian Science Monitor

“Part history, part travelogue . . . Philbrick wrestles with [America’s] problems, some of Washington’s vintage, that continue to afflict us.” —The New York Times

“Philbrick retraces three trips that George Washington took during his presidency. . . . Through the pieces, a valuable view of Washington emerges . . . a man of physical grace and character who grasped the personal effect he had on people.” —AirMail.com

“Regardless of the readers’ preconceived notions about our first president, enough new facts are revealed and old myths dispelled to keep the pages turning rapidly.” —Lincoln Journal Star

“An enjoyable volume that is one-third history, one-third travelogue, and one-third meditation on what Washington means in the twenty-first century.” —Pittsburgh Post-Gazette

“Washington emerges as the complicated, flawed but no less heroic leader that his newborn country desperately needed. . . . The quantity and quality of the details Philbrick gathers as he straddles past and present make this an extraordinary read.” —BookPage

“Nat Philbrick brings three key attributes to this brilliant book: a deep grounding in colonial history; amusing personal anecdotes observed with a shrewd traveler’s eye; and an abiding love of this quirky, unique nation. Travels with George is all the more crucial in this time of national division, when a look back to a unifying figure like our first President matters all the more.” —Admiral James Stavridis, US Navy, 16th Supreme Allied Commander at NATO

“Philbrick moves from one century’s point of view to another’s, perceptively observing what has changed and what has not. He particularly notes the past and current legacy of slaveholding, whether in North or South. This provides highly personal reflection and unique perspective on both the history and the often-contradictory lives of present-day Americans.” —Booklist (starred review)

“Washington, as portrayed by Philbrick, is an impressive figure who knew that he was a national icon, but this did not go to his head. . . . Though some histories of the era treat slavery as an unfortunate footnote, Philbrick does not shy away from pointing out its evils. When he cuts back to the present, roads and accommodations improve, and he encounters monuments, museums, and local historians who describe details of Washington’s visit and, more often than not, disprove a popular myth.” —Kirkus Reviews