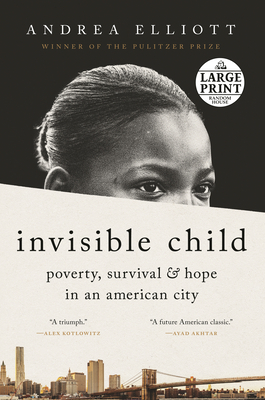 “From its first indelible pages to its rich and startling conclusion, Invisible Child had me, by turns, stricken, inspired, outraged, illuminated, in tears, and hungering for reimmersion in its Dickensian depths.”—Ayad Akhtar, author of Homeland Elegies

In Invisible Child, Pulitzer Prize winner Andrea Elliott follows eight dramatic years in the life of Dasani, a girl whose imagination is as soaring as the skyscrapers near her Brooklyn shelter. In this sweeping narrative, Elliott weaves the story of Dasani’s childhood with the history of her ancestors, tracing their passage from slavery to the Great Migration north. As Dasani comes of age, New York City’s homeless crisis has exploded, deepening the chasm between rich and poor. She must guide her siblings through a world riddled by hunger, violence, racism, drug addiction, and the threat of foster care. Out on the street, Dasani becomes a fierce fighter “to protect those who I love.” When she finally escapes city life to enroll in a boarding school, she faces an impossible question: What if leaving poverty means abandoning your family, and yourself?

A work of luminous and riveting prose, Elliott’s Invisible Child reads like a page-turning novel. It is an astonishing story about the power of resilience, the importance of family and the cost of inequality—told through the crucible of one remarkable girl.

Winner of the J. Anthony Lukas Book Prize • Finalist for the Bernstein Award and the PEN/John Kenneth Galbraith Award

Andrea Elliott is an investigative reporter for The New York Times. Her reporting has been awarded two Pulitzer Prizes, a George Polk Award, the J. Anthony Lukas Book Prize, an Overseas Press Club award, and other honors. She has served as an Emerson fellow at New America, a visiting journalist at the Russell Sage Foundation, and is the recipient of a Whiting Foundation grant. In 2015, she received Columbia University’s Medal for Excellence, given to one alumnus or alumna under the age of forty-five. Elliott is the first woman to win individual Pulitzer Prizes in both Journalism and Arts & Letters. She lives in New York City. This is her first book.

“A classic to rank with Orwell.”—The Sunday Times

“From its first indelible pages to its rich and startling conclusion, Invisible Child had me, by turns, stricken, inspired, outraged, illuminated, in tears, and hungering for reimmersion in its Dickensian depths. This book is so many things: a staggering feat of reporting, an act of profound civic love, an extraordinarily moving tale about the fierceness of family love, and above all, a future American classic.”—Ayad Akhtar, author of Homeland Elegies

“A wonderful and important book.”—Tracy Kidder, author of Strength in What Remains and Mountains Beyond Mountains

“Andrea Elliott’s Invisible Child swept me away. Filled with unexpected twists and turns, Dasani’s journey kept me up nights reading. Elliott spins out a deeply moving story about Dasani and her family, whose struggles underscore the stresses of growing up poor and Black in an American city, and the utter failure of institutions to extend a helping hand. Invisible Child is a triumph.”—Alex Kotlowitz, bestselling author of There Are No Children Here

“Elliott’s book is a triumph of in-depth reporting and storytelling. It is a visceral blow-by-blow depiction of what ‘structural racism’ has meant in the lives of generations of one family. But above all else it is a celebration of a little girl—an unforgettable heroine whose frustration, elation, exhaustion, and intelligence will haunt your heart.”—Ariel Levy, author of The Rules Do Not Apply

“With her Invisible Child, Andrea Elliott has achieved a towering feat of reporting that paints, layer by layer, an extraordinary portrait of a child, a family, a city, and the nation that produced them. From start to finish, she sustains an insatiably curious and deeply empathetic focus on worlds that so many people work hard, if mostly unconsciously, to never really see.”—Howard W. French, author of Born in Blackness: Africa, Africans, and the Making of the Modern World, 1471 to the Second World War

“Invisible Child is hands down the best book I have read in years. This is a profoundly moving investigation into what it means to truly love other human beings. . . . A masterpiece.”—Thomas Harding, bestselling author of Hanns and Rudolf and Blood on the Page

“Stunning . . . a remarkable achievement that speaks to the heart and conscience of a nation.”—Publishers Weekly (starred review)

“A heartbreaking story of a family . . . This important book packs a real gut punch.”—Booklist (starred review)