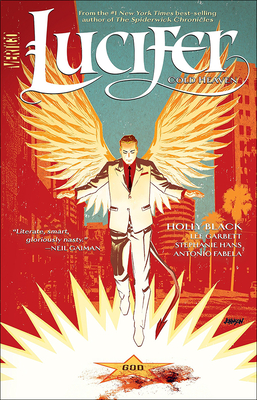 By Holly Black
$26.95
Backordered. Place an order and we will let you know when to expect your book.

The antihero who made his debut in THE SANDMAN and starred in his own hit series is back in a new series by best-selling writer Holly Black ("The Spiderwick Chronicles")
As this new series begins, God is dead and Gabriel has accused Lucifer of His murder. Lucifer had motive and opportunity, but claims he can prove his innocence. If Gabriel finds the killer and takes the culprit into custody, Lucifer's sins will be forgotten, and he'll be welcomed back to the Silver City. So, despite the fact that Lucifer just opened a new nightclub on Earth and is hiding a mysterious wound, the two brothers set off to solve their Father's murder. Their investigation will span Heaven, Hell, Earth, and beyond in this antagonistic buddy-cop noir with an angelic flare.
This daring new graphic novel reintroduces the former King of Hell to a new generation of readers watching Fox's new 2016 series "Lucifer" Collects issues #1-6.

Holly Black is the author of best-selling contemporary fantasy books for kids and teens. Some of her titles include "The Spiderwick Chronicles" (with Tony DiTerlizzi), "The Modern Faerie Tale" series, "The Good Neighbors" graphic novel trilogy (with Ted Naifeh), the "Curse Workers" series, "Doll Bones," and her new dark fantasy novel, "The Coldest Girl in Coldtown." She has been a finalist for the Mythopoeic Award, a finalist for an Eisner Award, and the recipient of the Andre Norton Award and a Newbery Honor. She currently lives in New England with her husband and son in a house with a secret door.