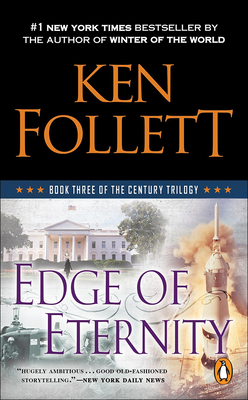 This is book number 3 in the Century Trilogy series.

The final book in Ken Follett's #1 "New York Times "bestselling Century Trilogy following "Winter of the World "and" Fall of Giants" now in mass market paperback.
Five international families American, German, Russian, English, and Welsh come to one of the most tumultuous eras of all: the 1960s through the 1980s, from civil rights, assassinations, mass political movements, and Vietnam to the Berlin Wall, the Cuban Missile Crisis, presidential impeachment, revolution and rock and roll.
East German teacher Rebecca Hoffmann discovers she's been spied on by the Stasi for years. George Jakes, the child of a mixed-race couple, finds himself in the middle of the seminal events of the civil rights battle. Cameron Dewar, the grandson of a senator, jumps at the chance to do some official and unofficial espionage for a cause he believes in. Dimka Dvorkin, a young aide to Krushchev, becomes a prime agent as the United States and the Soviet Union race to the brink of nuclear war, while his twin sister, Tanya, carves out a role that will take her from Moscow to Cuba to Prague to Warsaw and into history.

Ken Follett burst into the book world with "Eye of the Needle," an award-winning thriller and international bestseller. After several more successful thrillers, he surprised everyone with "The Pillars of the Earth "and its long-awaited sequel, " World Without End," a national and international bestseller. Follett s new, magnificent historical epic, the Century Trilogy, includes the bestselling "Fall of Giants," "Winter of the World," and "Edge of Eternity.""