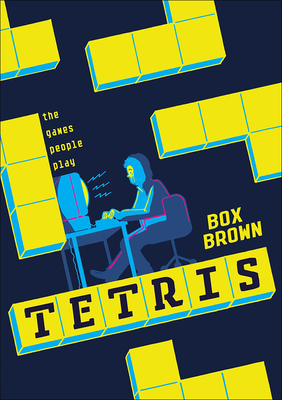 By Box Brown
$33.05
Backordered. Place an order and we will let you know when to expect your book.

A fascinating history of my favorite childhood obsession! Brown breaks down the story of how Russian coder, Alexey Pajitnov, came up with the idea and created the game that slowly became the obsession of his co-workers, friends, and then everyone else who touched it across the globe - and how the Soviet government and overseas video game business interests nearly ruined it for everyone (but didn't, fortunately). I read the entire book in about one hour, and immediately turned to Google to learn more about this crazy tale! Told as a serial comic, Brown has made the history of Tetris accessible to everyone, bringing to light the intricacies of how Tetris came to exist in my NES. I love having that extra context added to my fond memories of this game!

It is, perhaps, the perfect video game. Simple yet addictive, Tetris delivers an irresistible, unending puzzle that has players hooked. Play it long enough and you ll see those brightly colored geometric shapes everywhere. You ll see them in your dreams.

Alexey Pajitnov had big ideas about games. In 1984, he created Tetris in his spare time while developing software for the Soviet government. Once Tetris emerged from behind the Iron Curtain, it was an instant hit. Nintendo, Atari, Sega game developers big and small all wanted Tetris. A bidding war was sparked, followed by clandestine trips to Moscow, backroom deals, innumerable miscommunications, and outright theft.

In this graphic novel, New York Times bestselling author Box Brown untangles this complex history and delves deep into the role games play in art, culture, and commerce. For the first time and in unparalleled detail, Tetris: The Games People Play tells the true story of the world's most popular video game.

Box Brown is an Ignatz Award-winning cartoonist, illustrator, and comic publisher from Philadelphia. His book Andre the Giant: Life and Legend was released in 2014 and spent three weeks on the New York Times bestsellers list. His second graphic novel with publisher First Second is Tetris: The Games People Play. Brown launched the independent comics publishing house Retrofit Comics in 2011.