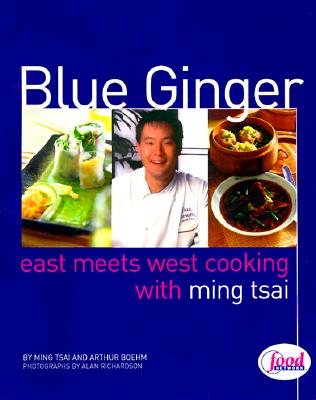 By Ming Tsai, Arthur Boehm
$35.00
Not available to order.

John Mariani has called Ming Tsai "the foremost interpreter of East-West cuisine in America today," and the appreciative diners at Blue Ginger, Ming's celebrated restaurant in Wellesley, Massachusetts, and fans of his top-rated Food Network show, East Meets West with Ming Tsai, agree. Now, in his first cookbook, Ming shares the technique and philosophy behind his exciting cross-cultural fare.

The key, Ming explains, is retaining a healthy respect for the traditions of each cuisine so that diverse elements can be combined in a harmonious way. His trademark Foie Gras and Morel Shu Mai, for example, elevates a traditional yet simple Asian preparation with a luxuriously sophisticated Western ingredient and transforms a humble dish into truly elegant fare. Prosciutto and Asian Pear Maki is a playful reinterpretation of a Japanese favorite, while Classic Roast Chicken with Sticky Rice Stuffing gives the holiday staple a savory new spin. The result is food that's inventive yet not trendy, complex in flavor but surprisingly easy to prepare.

In chapters devoted to Soups; Dim Sum (irresistible starters and bite-sized party fare); Rice and Noodles; Seafood; Birds; Meat; Sides; Oils, Dips and Seasonings; and Desserts, Ming proves again and again how delicious the coming together of East and West can be: Gingered Beef with Leeks and Asparagus, Hoisin-Marinated Chicken with Napa Slaw, Asian Gazpacho with Cilantro-Jicama Cream, and Wok-Flashed Salt and Pepper Shrimp are all quick and straightforward preparations that provide big flavors in every bite. And when it's time to pull out all the stops, a chapter dedicated to Over-the-Top recipes will guide home cooks through an array of showstopping dishes that dazzle with innovative techniques and presentations. Beverage suggestions accompany each recipe to complete the dining experience.

Filled with Ming's tips for working with unfamiliar ingredients and preparations, Blue Ginger is an outstanding introduction to the pleasures of East-West cooking.

Ming Tsai is chef/proprietor of Blue Ginger in Wellesley, Massachusetts, a 1999 James Beard nominee for Best New Restaurant. He was named Chef of the Year by Esquire in 1998 and was awarded an Emmy for his work on Food Network's highly rated cooking show, East Meets West with Ming Tsai. He has also created a signature series of ceramic knives, produced by Kyocera. He and his wife, Polly, live in Massachusetts.

Arthur Boehm writes about food for a number of national publications and is coauthor of The Modern Seafood Cook and Empire Kosher Chicken Cookbook. He lives in New York City.

"Ming Tsai puts to rest the notion that cross-cultural cooking is merely faddish or contrived. His is food that lingers long in the memory and promises to become an indelible part of American gastronomy."   ?John Mariani, Esquire

"No one in the country can match Mr. Tsai's virtuosity in this idiom."   ?R.W. Apple, Jr., New York Times

"I'd like to try one of everything in this delicious book! The recipes and techniques are as simple and clear as Ming's show, East Meets West with Ming Tsai, and his text is witty and insightful. If I had to sum this book up in one word it would be tasty."   ?Mario Batali

"In Ming Tsai's perfect introduction to the way of the new millennium he creates dazzling dishes that showcase a melodious marriage of flavors from the East and the West. This book is sure to wow your senses."   ?Sam Choy