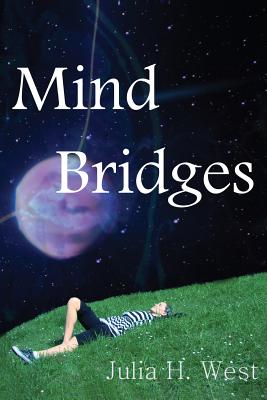 Within these pages you will meet:

* An apprentice artist who never gets to paint, and runs for more than her life

* A woman caught in a spell gone wrong, who takes matters into her own very capable hands

* A farm wife who fights off a magical plague, then battles invaders to save everything she loves

* A man who finds peace easing the ghosts of aliens millennia dead, until he discovers the Enemy that killed them

* A forklift driver moonlighting as a beautician, whose life is changed when she discovers that the aliens she visits perform real magic

Seven different magics; seven bridges between the modern world and the world of fantasy.

Cross over the Mind Bridge now.

Seven fantasy tales spanning space and time. Find magic in desert cliff dwellings, medieval kingdoms, and on alien planets. Wizards and witches, ghosts and merfolk, gods and aliens rub shoulders between the covers of this book.

As writers seem to, Julia H. West has held many arcane jobs. When she was a quality control technician for ultrasound heart machines, video recordings of cross sections of her heart were shipped all over the world with the machines. She's also been a genealogical researcher, an office manager, a secretary, a desktop publisher, a digger at an archaeological dig, a quality assurance tech, a webmaster, an aircraft electrician for the Air Force Reserves, and a keyer for the United States Post Office. Julia loves music, and sings with the Utah Filk Organization (that's not a typo: filk is music of the science fiction and fantasy community). She was a founding member of the local chapter of the Society for Creative Anachronism and still enjoys researching medieval culture. As a member of the Science Fiction and Fantasy Writers of America, she was awarded the Service to SFWA Award. She is a member of the Church of Jesus Christ of Latter-Day Saints (Mormons). Julia graduated Magna Cum Laude from the University of Utah with a BA in Anthropology. When people asked her what she was going to do with the degree, she'd tell them, "Write science fiction." Many of her stories incorporate fascinating bits of culture she discovered while studying. Julia's website is at http: //juliahwest.com