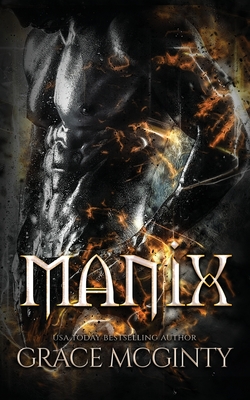 t's not everyday you get abducted from a strip club in only a thong.

While Naja had dreamed of someone rescuing her from her life, this wasn't how she thought it would go. Sure, on the surface it was perfect. Her abductors were huge, hot and members of a race of supernaturals that were rumoured to be extinct.

The Manix. Even the name was terrifying.

But someone needed to update their definition of extinct, because they were cluttering up her kitchen, looking at her with desperation that had little to do with sex and everything to do with something more life altering. They insisted she held the key to their survival. They said she was an Omega and they needed to do all sorts of freaky things with her to ensure the continuation of their species.

Naja wasn't against getting a little freaky, but there was a line a sane person wouldn't cross, but the Manix? They jumped across that line with rippling abs and both feet.

However, the Manix were the least of her problems right now. Naja's life was haunted by something worse than the boogeyman; a monster that leaves flowers on her doorstep like he was putting a tribute on her grave.

The Manix may be terrifying, but could they salvation from the very thing that's chasing her?

Or will they be too late to save the only female Omega they will ever find?

Manix is a Reverse Harem Omegaverse Standalone with MPREG.