A Fantasy Christmas: Tales From the Hearth (Paperback) 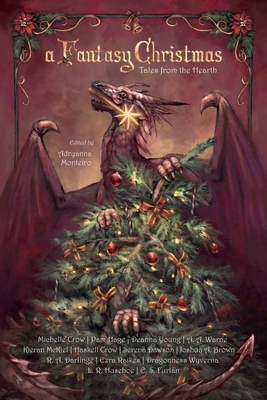 One theme - A Fantasy Christmas.

with this collection of fantasy festive tales...

FEATURING IN THIS ANTHOLOGY:

Michelle Crow- It's Beginning to Look a Lot Like Tinkmas
When a little bit of Christmas magic pulls Tink through space-time continuum, she finds herself face-to-face with two surprises: a curious little human and a tray of cookies.

Deanna Young- Late To The Party
Chaz's magical career goes up in smoke when the Christmas Eve delivery of a baby dragon goes terribly wrong.

A. A. Warne - FrankenSanta
Three naughty Elves accidently kill Santa Clause and decide to bring him back to life. Unfortunately, he's not quite the same.

Kieran McKiel- The Snows At Asrum
Far away from home, Alecksi fights a war he doesn't understand against a foe he doesn't know. As the holy of Rodestuo approaches, he decides he's had enough.

Haskell Crow- Sugared Dates
Adventure is just on the other side of the river, during the festival of lights. Aelynn wished he could celebrate, but he couldn't miss this opportunity while everyone was destracted.

Serena Dawson- A Heist, A Prophecy, And A Unicorn
When Taramon hears his arch enemy has taken a forbidden prophecy, he decides to steal it back; and with the help of his unicorn, rescue his brother from execution.

Joshua A. Brown- For All Of Clainsmyth
The light of the winter solstice holiday Clainsmyth, has been sent by the gods as a gift to the mortals. But dark forces want her magic, and so the race is on.

R. A. Darlinge- The Faded Photograph
Nicholai doesn't celebrate Christmas. Will sharing the pain of the past bring healing and Christmas spirit into his life?

Ezra Raikes- Half Chained, Entirely Unwanted
A brother and sister flee from prison, and take a chance to survive in the nightmarish forest beyond.

L. R. Huseboe- Folly Amongst The Holly
Invited to Christmas dinner with her best friend, Myrah is confronted with the magical truth about herself and the world around her.