American Sutra: A Story of Faith and Freedom in the Second World War (Paperback) 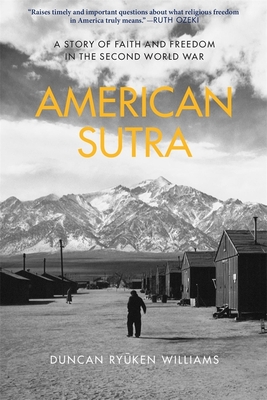 "Raises timely and important questions about what religious freedom in America truly means."
--Ruth Ozeki "A must-read for anyone interested in the implacable quest for civil liberties, social and racial justice, religious freedom, and American belonging."
--George Takei On December 7, 1941, as the bombs fell on Pearl Harbor, the first person detained was the leader of the Nishi Hongwanji Buddhist sect in Hawai'i. Nearly all Japanese Americans were subject to accusations of disloyalty, but Buddhists aroused particular suspicion. From the White House to the local town council, many believed that Buddhism was incompatible with American values. Intelligence agencies targeted the Buddhist community, and Buddhist priests were deemed a threat to national security. In this pathbreaking account, based on personal accounts and extensive research in untapped archives, Duncan Ryūken Williams reveals how, even as they were stripped of their homes and imprisoned in camps, Japanese American Buddhists launched one of the most inspiring defenses of religious freedom in our nation's history, insisting that they could be both Buddhist and American. "A searingly instructive story...from which all Americans might learn."
--Smithsonian "Williams' moving account shows how Japanese Americans transformed Buddhism into an American religion, and, through that struggle, changed the United States for the better."
--Viet Thanh Nguyen, author of The Sympathizer "Reading this book, one cannot help but think of the current racial and religious tensions that have gripped this nation--and shudder."
--Reza Aslan, author of Zealot