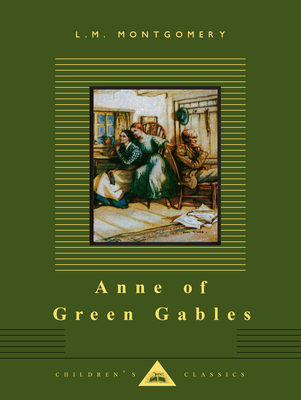 "This is the story of how orphan Anne (with an e) Shirley arrives on
sleepy Prince Edward Island and shakes everything (and everyone) up for
the better. Feisty, romantic, irrepressible, and a little too outspoken
for her own good, Anne is a breath of fresh air for her adoptive family
and the island in general. One of my all-time favorite books!"

An eleven-year-old orphan, Anne Shirley, comes to help out on a farm on Prince Edward Island and wins the hearts of everyone at Avonlea—a story so popular that it spawned eight sequels after its initial publication in 1908, and has sold millions of copies in paperback.

Lucy Maud Montgomery (1874-1942) was born in the village of Clifton (now New London) on Prince Edward Island in Canada. She was brought up by her grandparents after her mother died when she was two. Later her father moved away to Saskatchewan, where he remarried, and when she spent some months in his new home she was not happy. 'I do not think', she wrote, 'that the majority of grownups have any real conception of the tortures sensitive children suffer over any marked difference between themselves and the other denizens of their small world.'

While working as a reporter for the Halifax Daily Echo, she wrote Anne of Green Gables in the evenings over a period of eighteen months and when it was rejected by four publishers she put it away for two years. Then she revised it and a Boston publisher accepted it at once. When it appeared in 1908 the book proved so popular that ever afterwards she felt constrained by the public's constant demand for more stories about Anne. She did write five sequels – as well as many other novels – and they made her rich, but none reached the classic status of the first.

In 1911 she married Ewan Macdonald. She had two sons; she enjoyed fame and was made an Officer of the Order of the British Empire in 1935. She died in Toronto in 1942 and was buried in Cavendish Cemetery, not far from her birthplace.