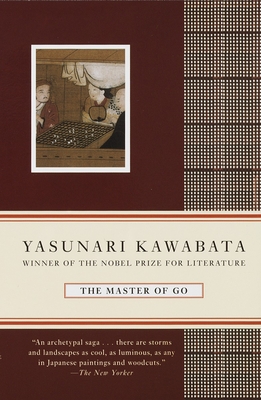 Go is a game of strategy in which two players attempt to surround each other’s black or white stones. Simple in its fundamentals, infinitely complex in its execution, Go is an essential expression of the Japanese spirit. And in his fictional chronicle of a match played between a revered and heretofore invincible Master and a younger, more modern challenger, Yasunari Kawabata captured the moment in which the immutable traditions of imperial Japan met the onslaught of the twentieth century.

The competition between the Master of Go and his opponent, Otaké, is waged over several months and layered in ceremony. But beneath the game’s decorum lie tensions that consume not only the players themselves but their families and retainers—tensions that turn this particular contest into a duel that can only end in death. Luminous in its detail, both suspenseful and serene, The Master of Go is an elegy for an entire society, written with the poetic economy and psychological acumen that brought Kawabata the Nobel Prize for Literature.

Translated from the Japanese by Edward G. Seidensticker

Yasunari Kawabata was born in Osaka in 1899. In 1968 he became the first Japanese writer to receive the Nobel Prize for Literature. One of Japan’s most distinguished novelists, he published his first stories while he was still in high school, graduating from Tokyo Imperial University in 1924. His short story “The Izu Dancer,” first published in 1925, appeared in The Atlantic Monthly in 1955. Kawabata authored numerous novels, including Snow Country (1956), which cemented his reputation as one of the preeminent voices of his time, as well as Thousand Cranes (1959), The Sound of the Mountain (1970), The Master of Go (1972), and Beauty and Sadness (1975). He served as the chairman of the P.E.N. Club of Japan for several years and in 1959 he was awarded the Goethe Medal in Frankfurt. Kawabata died in 1972.