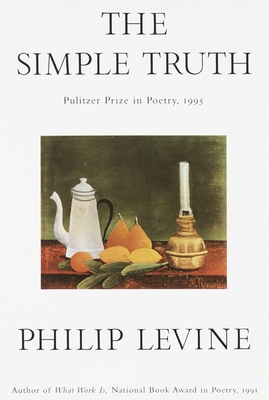 Winner of the Pulitzer Prize in 1995

Written in a voice that moves between elegy and prayer, The Simple Truth contains thirty-three poems whose aim is to weave a complex tapestry of myth, history (both public and private), family, memory, and invention in a search for truths so basic and universal they often escape us all.

Philip Levine was born in 1928 in Detroit and was formally educated there, in the public schools and at Wayne University (now Wayne State University). After a succession of industrial jobs, he left the city for good and lived in various parts of the country before settling in Fresno, California, where he taught at the state university until his retirement. For twelve autumns he served as poet in residence at New York University. He has received many awards for his books of poems, including the National Book Award in 1991 for What Work Is and the Pulitzer Prize in 1995 for The Simple Truth. In 2011 he was appointed Poet Laureate of the United States. He divides his time between Fresno, California, and Brooklyn, New York.

“I am a longtime admirer of Philip Levine’s poetry, but until now I thought he could never surpass The Names of the Lost, a book I love deeply. But The Simple Truth deserves its title—I wonder if any American poet since Walt Whitman himself has written elegies this consistently magnificent. The controlled pathos of every poem in the volume is immense, and gives me a new sense of Levine.”
—Harold Bloom