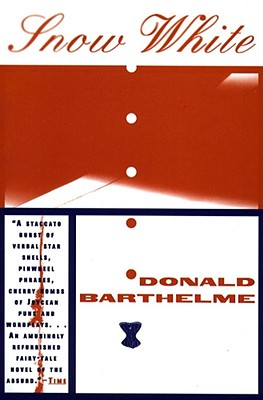 By Donald Barthelme
$13.99
On Our Shelves Now

An American short story writer and novelist acclaimed for his playful, postmodern style of short fiction, Barthelme’s first novel, Snow White, is a countercultural, experimental reconstruction of the Disney version of the traditional fairytale.

In Barthelme’s modern day world, Snow White is a seductive woman waiting for her prince to return to New York. Pushing the bounds of fiction and form, Barthelme subverts the classic tale, prompting The New York Times to call him “a splendid practitioner at the peak of his power” and inspiring a new generation of authors including Charles Baxter, Dave Eggers, and David Gates.

Donald Barthelme (April 7, 1931 – July 23, 1989) was an American author known for his playful, postmodernist style of short fiction. Barthelme also worked as a newspaper reporter for the Houston Post, was managing editor of Location magazine, director of the Contemporary Arts Museum in Houston (1961–1962), co-founder of Fiction (with Mark Mirsky and the assistance of Max and Marianne Frisch), and a professor at various universities. He also was one of the original founders of the University of Houston Creative Writing Program.