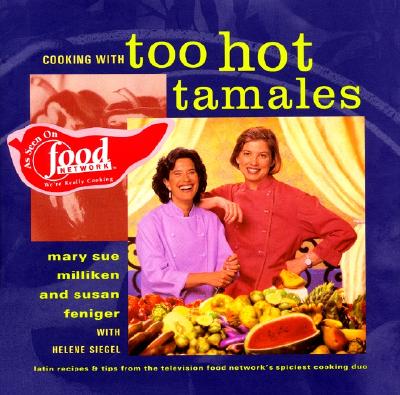 At last, the eagerly awaited companion to the Television Food Network series Too Hot Tamales is here, capturing the sassy cooking style that Mary Sue Milliken and Susan Feniger's nationwide television audience looks forward to every day. In over 150 recipes, the engaging duo demonstrate their honed culinary technique, their commitment to the finest, freshest ingredients, and their enthusiasm for flavors from around the world. Using traditional Mexican, Brazilian, Cuban, and Spanish tastes and combinations, enhanced by their creative, modern sensibilities,Too Hot Tamalessatisfies any appetite. From Roasted Chile Frittatas to Turkey Tamales with Fresh Cranberry Salsa to milky, cool Horchata Ice Cream with Cinnamon and Pecans, this ultramodern pair create recipes that are honest and accessible, yet funky and fun.Open this adventure some book and explore a now world of Latin American and Spanish flavors and cooking techniques. There is an entire section on the vivid salsas that we've come to crave, including a Three-Minute Salsa for the time impaired and a bracing Chipotle Tomatillo Salsa for heat seekers. Entries run the gamut from the simple and delicate Pan-Fried Grouper with Almonds to the lip-smacking Barbecued Ribs with Red Chile Sauce and Baked Pineapple. As demonstrated throughout their career, Milliken and Feniger consider vegetables a priority. Vagetarians both strict and occasional will appreciate the full-bodied vegetable and grain-based dishes offered within these pages. Entries such as the hearty Vegetarian Black Bean Chili, the Tortilla do Potato, and an elegant Artichoke Stow with Pine Nuts are both healthful and satisfying enough to seduce vegetarian and carnivore alike. For lighter fare, exciting salads become the main dish as in the brightly dressed Wilted Spinach Salad with Pickled Shallots. Finally, for sweet seekers, Milliken and Feniger delight even the biggest dessert diehards with such toothsome treats as leche frita (fried milk custardsquares), Guava Pastry Diamonds, and Pumpkin Cheesecake Tarts with Gingersnap Crust.

As the fans of Too Hot Tamales have come to expect, cooking tips and strategies for success in the kitchen are sprinkled throughout. Packed with indispensable advice on everything from safe knife handling and balancing sauces to buying and storing vegetables and spices, plus countless ways to bring out the natural flavor of food, Cooking with Too Hot Tamales will undoubtedly become a favorite kitchen reference. Seasoned entertainers Milliken and Feniger also share their special-occasion recipes and expertise for throwing fabulous fetes. Unusual and exciting drink and hors d'oeuvres recipes such as fiery Chile Vodka, cool Refresco do Mango, and crunchy Quinoa Fritters are just a few of the exciting party offerings. Best of all while the flavors are intricate and exotic, the techniques are simple as can be, allowing cooks to enjoy their own parties and savor their own creations.

Mary Sue Milliken and Susan Feniger have worked together since 1982 as co-chefs and co-proprietors of City restaurant and the Border Grill in Los Angeles, and are the authors of the acclaimed City Cuisine cookbook (Morrow, 1989). The Border Grill was chosen by Gourmet magazine in 1993 as one of the best restaurants in America. Milliken and Feniger live in Los Angeles.