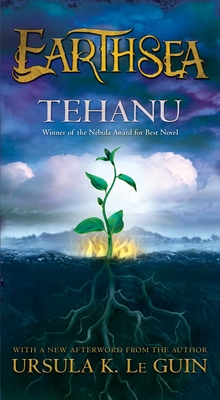 Years before, they had escaped together from the sinister Tombs of Atuan—she, an isolated young priestess, he, a powerful wizard. Now she is a farmer's widow, having chosen for herself the simple pleasures of an ordinary life. And he is a broken old man, mourning the powers lost to him not by choice.

A lifetime ago, they helped each other at a time of darkness and danger. Now they must join forces again, to help another -- the physically and emotionally scarred child whose own destiny remains to be revealed.

With millions of copies sold, Ursula K. Le Guin's Earthsea Cycle has earned a treasured place on the shelves of fantasy lovers everywhere. Complex, innovative, and deeply moral, this quintessential fantasy sequence has been compared with the work of J.R.R. Tolkien and C.S. Lewis, and has helped make Le Guin one of the most distinguished fantasy and science fiction writers of all time.

Ursula K. Le Guin (1929–2018) was the celebrated author of twenty-three novels, twelve volumes of short stories, eleven volumes of poetry, thirteen children’s books, five essay collections, and four works of translation. Her acclaimed books received the Hugo, Nebula, Endeavor, Locus, Otherwise, Theodore Sturgeon, PEN/Malamud, and National Book Awards; a Newbery Honor; and the Pushcart and Janet Heidinger Kafka Prizes, among others. In 2014, she was awarded the National Book Foundation Medal for Distinguished Contribution to American Letters, and in 2016 joined the short list of authors to be published in their lifetimes by the Library of America. Le Guin was also the recipient of the Association for Library Service to Children’s May Hill Arbuthnot Honor Lecture Award and the Margaret A. Edwards Award. She received lifetime achievement awards from the World Fantasy Convention, Los Angeles Times, Pacific Northwest Booksellers Association, and Willamette Writers, as well as the Science Fiction and Fantasy Writers of America Grand Master Award and the Library of Congress Living Legend Award. Her website is UrsulaKLeGuin.com.

"New and longtime Earthsea fans will be drawn to these impressive new editions."