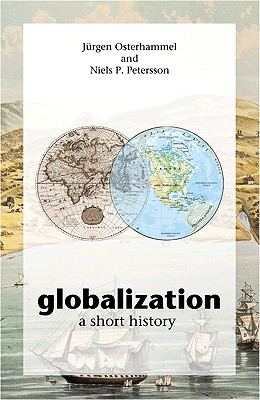 Globalization has become a popular buzzword for explaining today's world. The expression achieved terminological stardom in the 1990s and was soon embraced by the general public and integrated into numerous languages.

But is this much-discussed phenomenon really an invention of modern times? In this work, J rgen Osterhammel and Niels Petersson make the case that globalization is not so new, after all. Arguing that the world did not turn global overnight, the book traces the emergence of globalization over the past seven or eight centuries. In fact, the authors write, the phenomenon can be traced back to early modern large-scale trading, for example, the silk trade between China and the Mediterranean region, the shipping routes between the Arabian Peninsula and India, and the more frequently traveled caravan routes of the Near East and North Africa--all conduits for people, goods, coins, artwork, and ideas. Osterhammel and Petersson argue that the period from 1750 to 1880--an era characterized by the development of free trade and the long-distance impact of the industrial revolution--represented an important phase in the globalization phenomenon. Moreover, they demonstrate how globalization in the mid-twentieth century opened up the prospect of global destruction though nuclear war and ecological catastrophe. In the end, the authors write, today's globalization is part of a long-running transformation and has not ushered in a global age radically different from anything that came before. This book will appeal to historians, economists, and anyone in the social sciences who is interested in the historical emergence of globalization.