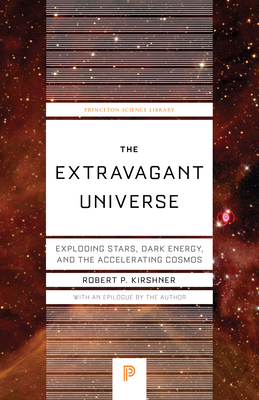 The Extravagant Universe tells the story of a remarkable adventure of scientific discovery. One of the world's leading astronomers, Robert Kirshner, takes readers inside a lively research team on the quest that led them to an extraordinary cosmological discovery: the expansion of the universe is accelerating under the influence of a dark energy that makes space itself expand. In addition to sharing the story of this exciting discovery, Kirshner also brings the science up-to-date in a new epilogue. He explains how the idea of an accelerating universe--once a daring interpretation of sketchy data--is now the standard assumption in cosmology today.

This measurement of dark energy--a quality of space itself that causes cosmic acceleration--points to a gaping hole in our understanding of fundamental physics. In 1917, Einstein proposed the cosmological constant to explain a static universe. When observations proved that the universe was expanding, he cast this early form of dark energy aside. But recent observations described first-hand in this book show that the cosmological constant--or something just like it--dominates the universe's mass and energy budget and determines its fate and shape. Warned by Einstein's blunder, and contradicted by the initial results of a competing research team, Kirshner and his colleagues were reluctant to accept their own result. But, convinced by evidence built on their hard-earned understanding of exploding stars, they announced their conclusion that the universe is accelerating in February 1998. Other lines of inquiry and parallel supernova research now support a new synthesis of a cosmos dominated by dark energy but also containing several forms of dark matter. We live in an extravagant universe with a surprising number of essential ingredients: the real universe we measure is not the simplest one we could imagine.

Robert P. Kirshner is the Clowes Professor of Science at Harvard University.