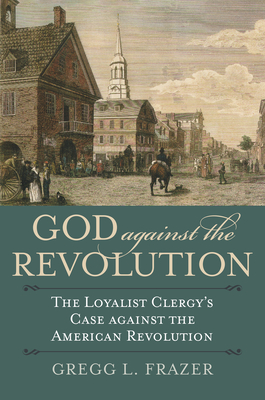 Because, it's said, history is written by the victors, we know plenty about the Patriots' cause in the American Revolution. But what about the perhaps one-third of the population who opposed independence? They too were Americans who loved the land they lived in, but their position is largely missing from our understanding of Revolution-era American political thought. With God against the Revolution, the first comprehensive account of the political thought of the American Loyalists, Gregg L. Frazer seeks to close this gap. Because the Loyalists' position was most clearly expressed by clergymen, God against the Revolution investigates the biblical, philosophical, and legal arguments articulated in Loyalist ministers' writings, pamphlets, and sermons. The Loyalist ministers Frazer consults were not blind apologists for Great Britain; they criticized British excesses. But they challenged the Patriots claiming rights as Englishmen to be subject to English law. This is one of the many instances identified by Frazer in which the Loyalist arguments mirrored or inverted those of the Patriots, who demanded natural and English rights while denying freedom of religion, expression, and assembly, and due process of law to those with opposing views. Similarly the Loyalist ministers' biblical arguments against revolution and in favor of subjection to authority resonate oddly with still familiar notions of Bible-invoking patriotism. For a revolution built on demands for liberty, equality, and fairness of representation, God against Revolution raises sobering questions--about whether the Patriots were rational, legitimate representatives of the people, working in the best interests of Americans. A critical amendment to the history of American political thought, the book also serves as a cautionary tale in the heated political atmosphere of our time.