Summers Under the Tamarind Tree: Recipes and memories from Pakistan (Hardcover) 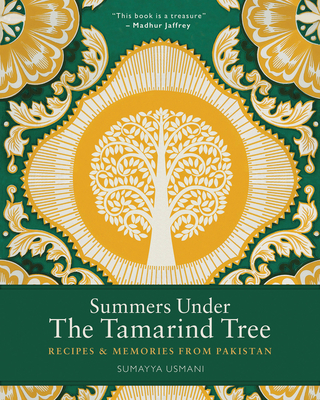 Summers Under the Tamarind Tree is a contemporary Pakistani cookbook celebrating the varied, exciting and often-overlooked cuisine of a beautiful country.

Former lawyer-turned-food writer and cookery teacher Sumayya Usmani captures the rich and aromatic pleasure of Pakistani cooking through more than 100 recipes as she celebrates the heritage and traditions of her home country and looks back on a happy childhood spent in the kitchen with her grandmother and mother.

While remaining uniquely its own, Pakistani food is influenced by some of the world's greatest cuisines. With a rich coastline, it enjoys spiced seafood and amazing fish dishes; while its borders with Iran, Afghanistan, India and China ensure strong Arabic, Persian and varied Asian flavours.

Experience the wonderful flavours of Pakistan with:

Learn to cook some of the rich, varied and delicious Pakistani dishes with this beautiful showcase of the exotic yet achievable recipes of Pakistan.

Well-connected and beloved in the food world, Sumayya Usmani went from practising law for twelve years to pursuing food writing and teaching. Her first book, Summers Under the Tamarind Tree: Recipes and Memories from Pakistan (Frances Lincoln, 2016) was the first Pakistani cookbook in Britain. Her mentor and friend Madhur Jaffrey, who wrote the main blurb, calls the book 'a treasure'. It won the Best First Cookbook category in the Gourmand Cookbook Awards in 2016. It was also shortlisted for the Edward Stanford Travel Writing Award. Her second cookbook, Mountain Berries and Desert Spice: Sweet Inspirations from the Hunza Valley to the Arabian Sea (Frances Lincoln, 2017) was shortlisted in the Best Cookbook of the Year category at the Food & Travel Magazine Awards. Sumayya won The Scottish Book Trust's Next Chapter Award in 2021 for Andaza as a work in progress. Sumayya is an experienced cookery teacher having taught in many UK-based cookery schools, including Divertimenti and the School of Artisan Food and her style of teaching is based on inspiring people to trust their senses and intuition with flavours. She is an instinctual cook and storyteller. She also runs her own social enterprise cook school in Glasgow. She has been featured as a resident food writer for four weeks in the Guardian COOK supplement (now known as Feast), and has also featured in the Telegraph, New York Times, Independent, Saveur, Delicious, Olive, BBC Good Food and Food 52. She was called 'the go-to expert in Pakistani cuisine' by BBC Good Food Magazine. Sumayya is a BBC broadcaster and has been a presenter on BBC Radio Scotland's Kitchen Cafe as well as being a regular panelist on Jay Rayner's The Kitchen Cabinet on BBC Radio 4. She has appeared on BBC Radio 4's Women's Hour. On television, she has appeared on Madhur Jaffrey's Curry Nation on Good Food Channel, and various times on STV and London Live. Sumayya mentors other writers online as well as hosting her podcast, A Savoured Life.

'This book is a treasure. Charm, information and what Sumayya calls ‘the flavour of my Pakistani heritage’ permeates every single recipe. It's an excellent book both for armchair-reading and for its detailed recipes.'—Madhur Jaffrey

'My favourite sort of cookbook: personal, beautiful and full of things I want to eat.'—Meera Sodha

'Sumayya's words bring to life the aromas of her exquisite recipes, as well as the story of a little-known culinary heritage. It's wonderful to discover the world of Pakistani food and andaza (sensory cooking) in this perfect cookbook.'—Olia Hercules

“As the rich secrets of saffron-infused rice and comforting parathas are shared with us, we can be thankful that Usmani ditched law to give a voice to the food of Pakistan.”—The Telegraph Magazine

“Cookbook to Covet…fascinating, visually appealing and filled with tales, childhood memories and plenty of insight into inspiring, traditional dishes from Pakistan” —Grazia magazine

"I had a choice: stay in, and cook from Sumayya Usmani’s fabulous new Pakistani cookbook, Summers Under The Tamarind Tree, or review a restaurant. Glasgow-based Usmani has produced one of those volumes you should definitely not read in bed because it will wake you up and make you urgently hungry."—Joanna Blythman, Sunday Herald

“Memoir cookbooks are often the most successful in the food genre. Sumayya Usmani’s Summers Under the Tamarind Tree is a perfect example, more than living up to the “recipes and memories from Pakistan” that the subtitle promises.” —The Irish Times

“Open this spellbinding cookbook, and its stunning photographs will instantly cast you away to the bustling markets, street food stalls and generously-laden dinner tables of Pakistan. Sumayya Usmani garnishes her recipes with charming anecdotes about her childhood in Pakistan. This book is an unprecedentedly authentic snapshot into the culinary culture of this often overlooked country.”—independent.co.uk

"A successful combination of recipe book and memoir which will give you an interesting - and tasty - introduction to Pakistani cookery."—UK Handmade

"...as soon as I'd turned the first page and started reading I felt myself instantly drawn in."—Great British Chefs

"Beautifully written and photographed, this collection of more than 100 family recipes will inspire you to open up the spice cabinet and make something brand-new."

“This book is an excellent read, full of information for those seeking to dip into Pakistani cookery and need a helpful hand or those experienced and looking to expand their skills and tastes.” —Food and Drink Glasgow