Summers Under the Tamarind Tree: Recipes & Memories from Pakistan (Hardcover) 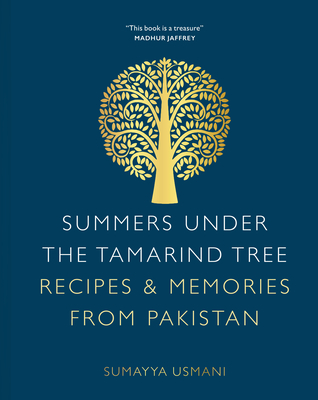 Summers Under the Tamarind Tree is a contemporary Pakistani cookbook celebrating the varied, exciting and often-overlooked cuisine of a beautiful country.

Former lawyer-turned-food writer and cookery teacher Sumayya Usmani captures the rich and aromatic pleasure of Pakistani cooking through more than 100 recipes as she celebrates the heritage and traditions of her home country and looks back on a happy childhood spent in the kitchen with her grandmother and mother.

While remaining uniquely its own, Pakistani food is influenced by some of the world's greatest cuisines. With a rich coastline, it enjoys spiced seafood and amazing fish dishes; while its borders with Iran, Afghanistan, India and China ensure strong Arabic, Persian and varied Asian flavours.

Experience the wonderful flavours of Pakistan with:

Learn to cook some of the rich, varied and delicious Pakistani dishes with this beautiful showcase of the exotic yet achievable recipes of Pakistan.

Well-connected and beloved in the food world, Sumayya Usmani went from practising law for twelve years to pursuing food writing and teaching. Her first book, Summers Under the Tamarind Tree: Recipes and Memories from Pakistan (Frances Lincoln, 2016) was the first Pakistani cookbook in Britain. Her mentor and friend Madhur Jaffrey, who wrote the main blurb, calls the book 'a treasure'. It won the Best First Cookbook category in the Gourmand Cookbook Awards in 2016. It was also shortlisted for the Edward Stanford Travel Writing Award. Her second cookbook, Mountain Berries and Desert Spice: Sweet Inspirations from the Hunza Valley to the Arabian Sea (Frances Lincoln, 2017) was shortlisted in the Best Cookbook of the Year category at the Food & Travel Magazine Awards. Sumayya won The Scottish Book Trust's Next Chapter Award in 2021 for Andaza as a work in progress. Sumayya is an experienced cookery teacher having taught in many UK-based cookery schools, including Divertimenti and the School of Artisan Food and her style of teaching is based on inspiring people to trust their senses and intuition with flavours. She is an instinctual cook and storyteller. She also runs her own social enterprise cook school in Glasgow. She has been featured as a resident food writer for four weeks in the Guardian COOK supplement (now known as Feast), and has also featured in the Telegraph, New York Times, Independent, Saveur, Delicious, Olive, BBC Good Food and Food 52. She was called 'the go-to expert in Pakistani cuisine' by BBC Good Food Magazine. Sumayya is a BBC broadcaster and has been a presenter on BBC Radio Scotland's Kitchen Cafe as well as being a regular panelist on Jay Rayner's The Kitchen Cabinet on BBC Radio 4. She has appeared on BBC Radio 4's Women's Hour. On television, she has appeared on Madhur Jaffrey's Curry Nation on Good Food Channel, and various times on STV and London Live. Sumayya mentors other writers online as well as hosting her podcast, A Savoured Life.