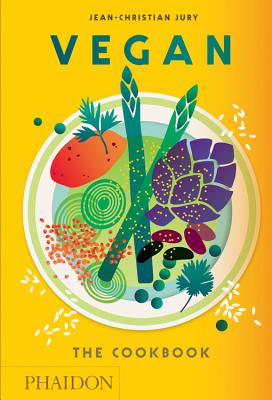 "The definitive and most comprehensive cookbook of traditional and authentic home cooking vegan dishes from 150 countries around the world." - Vegan Magazine

With nearly 500 vegetable-driven recipes, Vegan: The Cookbook, inspired by cuisines around the work, brings vegan home cooking to new levels of deliciousness.Featuring dishes from countries ranging from Albania to Zambia, it showcases the culinary diversity of vegan cuisine, highlighting regional fruits and vegetables, traditional cooking techniques, and universally delectable flavours. Home cooks will discover sweet and savoury starters, soups, salads, mains, and desserts for all to enjoy, accompanied by straightforward instructions and gorgeous colour photography.

Jean-Christian Jury is a vegan and raw-food chef from Toulouse, France. In 2008, he opened La Mano Verde in Berlin, Germany, his first vegan restaurant, and received praise from Saveur and Rodale's Organic Life, and many international publications. He now lives in Los Angeles, California, where he is developing La Mano Verde.

'The cookbook that's been making me very happy in the kitchen.' - Alexander Lobrano, Wall Street Journal

'The definitive and most comprehensive cookbook of traditional and authentic home cooking vegan dishes from 150 countries around the world.' - Vegan Magazine Online

'A tour de force of vegan cuisine inspired by the culinary traditions from every corner of the globe.' - theKitchn.com

'Indulge in animal free fare from around the world.' - Natural Lifestyle

'. . . .filled with the scents and sensibilities of the world's plant-based bounty... Vegan: The Cookbook is a welcome and welcoming compendium of the many flavors and pleasures that we can rustle up in our own kitchens ... The thrill of discovery lurks in every page.' - The Vegetarian Gazette

'If you buy just one cookbook this year, make it Vegan: The Cookbook.' - PETA

'Vegan is not only an informative cookbook but... also [a] guide to the right way to eat... It shows how a vegan diet can be both delicious and full of nutritional value.' - Kwang Uh, Chef, Baroo

'[This] comprehensive cookbook is a gastronomic tour of vegan cuisine, featuring nearly 500 recipes from France to Nigeria. Beautifully illustrated, the dishes are both creative and easily executed. (It's also a gorgeous coffee table accessory.)' - Furthermore/Equinox

'A cheesecake like no other. Its color is out of this world as is the taste. If you have never tried any vegan baking, this is a stellar place to start.' - Splendid Table

'Vegan: the Cookbook is not an ordinary book of recipes. It is an international compendium of recipes shared by home cooks around the world, a coffee table volume extolling the merits of vegan dining as well as a sourcebook of unique recipes time tested by people who cook for their families every day. Plaudits go to Jury for presenting recipes for gourmet foods that are not only delicious, but also bear the stamp of good health.' - Vegetarians in Paradise

'Now you can eat your way around the world with Jean-Christian Jury, without leaving your kitchen. There are over 450 vegan dishes in Vegan: The Cookbook from countries such as Peru, France, Turkey, India and as far away as Nigeria and Tunisia. He has done all the work so we can go on a gastronomic tour of the globe.' - Chloe Coscarelli, vegan chef and cookbook author

'Jean-Christian has long been a pioneer and visionary leader in the plant-based world. Vegan: The Cookbook brings to life the depth of experience, creativity and global approach that has defined his work over the last several years. I am glad to see these wonderful recipes shared with a world that has a growing interest in healthier, sustainable cuisine.' - Chef Matthew Kenney

'For a long time, vegan cooking has lived in the shadow of the health food movement of the Sixties and Seventies, but here's a cookbook that blasts away the past and jumps boldly into a multi-culinary future

where veganism isn’t just about saying no to animal products but is instead about saying yes to hundreds of mind-blowing dishes from Iraq to Ireland, and from the Philippines to Peru.' - Amanda Cohen, chef & owner, Dirt Candy

'From the first sight and then the first bite at Jean-Christian Jury's La Mano Verde in Berlin, I was in love. Now, with Vegan: The Cookbook, It's a dream come true to have Chef Jean-Christian in my kitchen! The recipes in this beautiful book are creative but not complex, thanks to his clear directions.' - Mimi Kirk, bestselling author, plant-based chef, international speaker