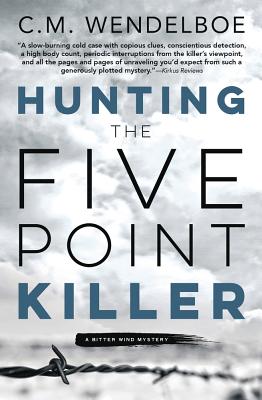 This is book number 1 in the Bitter Wind Mystery series.

On the tenth anniversary of a series of unsolved murders, the Five Point Killer is back for blood--and retired cop Arn Anderson could be the next investigator who gets too close to the truth.

Retired detective Arn Anderson never thought he'd be broke enough to take on a cold murder case. Or desperate enough to team up with a TV reporter. Or pathetic enough to go back to his rundown childhood home after he swore he'd left Cheyenne for good. But here he is, hunting a serial killer who also appears to have come out of retirement. On the anniversary of the Five Point Killer's crimes, Arn's only option is to survive the carnage of a murderer who may be too twisted--and too brilliant--to catch.

Praise:
A slow-burning cold case with copious clues, conscientious detection, a high body count, periodic interruptions from the killer's viewpoint, and all the pages and pages of unraveling you'd expect from such a generously plotted mystery.--Kirkus Reviews

A terrific debut...Wendelboe is a skilled writer who ratchets up the suspense.--Margaret Coel, New York Times bestselling author of Winter's Child

C. M. Wendelboe (Cheyenne, WY) is the author of the Spirit Road Mysteries (Penguin). During his thirty-eight-year career in law enforcement, he served successful stints as a sheriff’s deputy, police chief, policy adviser, and supervisor for several agencies. He was a patrol supervisor when he retired to pursue his true vocation as a fiction writer.  www.SpiritRoadMysteries.com