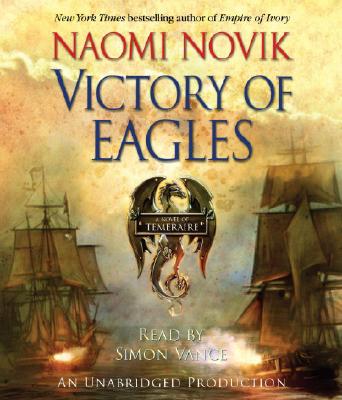 Naomi Novik’s triumphant debut, His Majesty’s Dragon, introduced a dynamic new pair of heroes to the annals of fantasy fiction: the noble fighting dragon Temeraire and his master and commander, Capt. Will Laurence. Now in the latest novel, they soar to new heights of breathtaking action and brilliant imagination.

It is a grim time for the dragon Temeraire. On the heels of his mission to Africa, seeking the cure for a deadly contagion, he has been removed from military service–and his captain, Will Laurence, has been condemned to death for treason. For Britain, conditions are grimmer still: Napoleon’s resurgent forces have breached the Channel and successfully invaded English soil. Napoleon’s prime objective: the occupation of London.

Separated by their own government and threatened at every turn by Napoleon’s forces, Laurence and Temeraire must struggle to find each other amid the turmoil of war and to aid the resistance against the invasion before Napoleon’s foothold on England’s shores can become a stranglehold.

If only they can be reunited, master and dragon might rally Britain’s scattered forces and take the fight to the enemy as never before–for king and country, and for their own liberty. But can the French aggressors be well and truly routed, or will a treacherous alliance deliver Britain into the hands of her would- be conquerors?

Naomi Novik is the acclaimed author of "His Majesty's Dragon, Throne of Jade, Black Powder War, "and "Empire of Ivory, "the first four volumes of the Temeraire series. A history buff with a particular interest in the Napoleonic era, Novik studied English literature at Brown University, then did graduate work in computer science at Columbia University before leaving to participate in the design and development of the computer game Neverwinter Nights: Shadows of Undrentide. Novik lives in New York City with her husband and six computers. Visit the author's website at www.temeraire.org.

“A new writer is soaring on the wings of a dragon.”
–The New York Times

“These are beautifully written novels: not only fresh, original, and fast-paced, but full of wonderful characters with real heart.”
–Peter Jackson

“A gripping adventure full of rich detail and the impossible wonder of gilded fantasy.”
–Entertainment Weekly

“Novik’s influences run the gamut from Jane Austen to Patrick O’Brian, with a side trip through Anne McCaffrey. Her books are completely involving and probably addictive, their central conceit explored in clever detail with a great deal of wit and historical insight.”
–San Francisco Chronicle

“So realistic that it drowns disbelief . . . first-class in every respect.”
–Booklist (starred review)