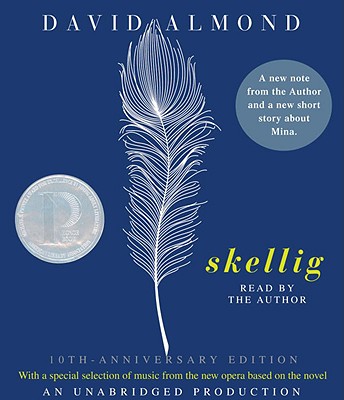 David Almond's Printz Honor winning novel celebrates its 10th anniversary
Ten-year-old Michael was looking forward to moving into a new house. But now his baby sister is ill, his parents are frantic, and Doctor Death has come to call. Michael feels helpless. Then he steps into the crumbling garage. . . . What is this thing beneath the spiders' webs and dead flies? A human being, or a strange kind of beast never before seen? The only person Michael can confide in is his new friend, Mina. Together, they carry the creature out into the light, and Michael's world changes forever. . . .

From the Trade Paperback edition.

David Almond grew up in a large family in northeastern England and says, The place and the people have given me many of my stories. He worked as a postman, a brush salesman, an editor, and a teacher but began to write seriously after he finished college. His first novel for children, Skellig, was a Michael L. Printz Honor Book and an ALA-ALSC Notable Children s Book and appeared on many best book of the year lists."

"Its strength as a novel is in its subtlety. . . . Skellig is a fine book." — The New York Times Book Review

"British novelist Almond makes a triumphant debut in the field of children’s literature with prose that is at once eerie, magical, and poignant." — Publishers Weekly, Starred


From the Paperback edition.