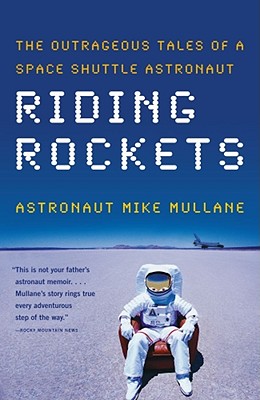 In 1978, the first group of space shuttle astronauts was introduced to the world -- twenty-nine men and six women who would carry NASA through the most tumultuous years of the space shuttle program. Among them was USAF Colonel Mike Mullane, who, in his memoir Riding Rockets, strips the heroic veneer from the astronaut corps and paints them as they are -- human.

Mullane's tales of arrested development among military flyboys working with feminist pioneers and post-doc scientists are sometimes bawdy, often comical, and always entertaining. He vividly portrays every aspect of the astronaut experience, from telling a female technician which urine-collection condom size is a fit to hearing "Taps" played over a friend's grave. He is also brutally honest in his criticism of a NASA leadership whose bungling would precipitate the Challenger disaster -- killing four members of his group. A hilarious, heartfelt story of life in all its fateful uncertainty, Riding Rockets will resonate long after the call of "Wheel stop."

Upon his graduation from West Point in 1967, Mike Mullane was commissioned in the USAF. He flew 134 combat missions in Vietnam. Selected in the first group of space shuttle astronauts, he completed three space missions. He lives in Albuquerque, New Mexico, with his wife, Donna, and enjoys the challenge of Colorado's fourteen-thousand-foot peaks -- six climbed, forty-seven to go. He is also an acclaimed motivational speaker.

"Space-age America in all its glory and folly as seen through the eyes of a remarkable writer who has brilliantly captured the triumphant and tragic years of the space shuttle era. Riding Rockets soars."
-- Homer Hickam, author of Rocket Boys

"This is not your father's astronaut memoir.... Mullane's story rings true every adventurous step of the way."
-- Rocky Mountain News