The Song Is You: A Novel (Paperback) 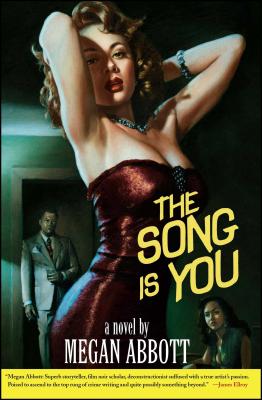 From Edgar® -nominated novelist Megan Abbott, who makes “devotees of Cain and Chandler fall down and beg for mercy” (The Hollywood Reporter), The Song Is You imagines a thrilling conclusion to the still unsolved since 1949 Black Dahlia murder case.

On October 7, 1949, dark-haired starlet Jean Spangler kissed her five-year-old daughter good-bye and left for a night shoot at a Hollywood studio. "Wish me luck," she said as she crossed her fingers, winked, and walked away. She was never seen again. The only clues left behind: a purse with a broken strap found in a nearby park, a cryptic note, and rumors about mobster boyfriends and ill-fated romances with movie stars.

Drawing on this true-life missing person case, Megan Abbott's The Song Is You tells the story of Gil "Hop" Hopkins, a smooth-talking Hollywood publicist whose career, despite his complicated personal life, is on the rise. It is 1951, two years after Jean Spangler's disappearance, and Hop finds himself unwillingly drawn into the still unsolved mystery by a friend of Jean who blames Hop for concealing details about Jean's whereabouts the night she vanished. Driven by guilt and fear of blackmail, Hop delves into the case himself, feverishly trying to stay one step ahead of an intrepid female reporter also chasing the story. Hop thought he'd seen it all, but what he uncovers both tantalizes and horrifies him as he plunges deeper and deeper into Hollywood's substratum in his attempt to uncover the truth.

In the tradition of James Ellroy's The Black Dahlia and Joyce Carol Oates's Blonde, The Song Is You conjures a heady brew of truth and speculation, of fact and pulp fiction, taking the reader on a dark tour of Tinseltown, from movie studios, gala premieres, and posh nightclubs to gangsters, blackmailing B-girls, and the darkest secrets that lie behind Hollywood's luminous façade. At the center of it all is Hop, a man torn between cutthroat ambition and his own best intentions.

Megan Abbott is the author of three acclaimed novels, the Edgar Award–winning Queenpin, The Song Is You, and Die a Little. She lives in New York City.

"Megan Abbott continues to be my absolute favorite new author, and her second novel, The Song Is You, is even better than her first -- super-sexy, superbly written, richly atmospheric, and with an ending you'll never see coming!"