What to Watch When (Hardcover) 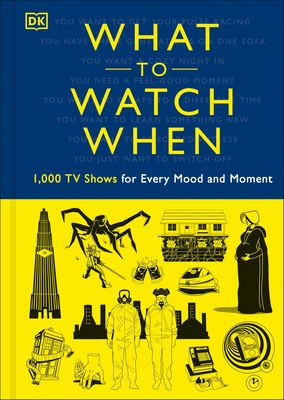 Answering the eternal question... WHAT TO WATCH NEXT?

Looking for a box set to get your adrenaline racing or to escape to a different era? In need of a good laugh to lift your spirits? Hunting for a TV show that the whole family can watch together?

If you're feeling indecisive about your next binge-watching session, we've done the hard work for you. Featuring 1,000 carefully curated reviews written by a panel of TV connoisseurs, What To Watch When offers up the best show suggestions for every mood and moment.

Christian Blauvelt is an entertainment and culture journalist, who serves as the managing editor of leading film and TV industry website IndieWire. He regularly appears on TV and has presented at South by Southwest and San Diego Comic-Con. Blauvelt is the author of many books including Star Wars Made Easy and New York: The Big Apple on the Big Screen.

Laura Buller has written and contributed to a number of DK books on topics as diverse as Wookiees to women's rights. Her favorite television character is Saul Goodman; her number one show is M*A*S*H seasons 1-3, and her go-to box set is The West Wing.

Andrew Frisicano is a writer and editor who has written professionally about music, film, and pop culture for more than a decade. His work has appeared in publications including Pitchfork, Rolling Stone, and Time Out
New York, where he served as the music editor.

Stacey Grant is a native Texan-turned-New Yorker who's written a myriad of entertainment pieces for Seventeen, MTV News, BuzzFeed, TVGuide.com, PopSugar, and more. She is the author of Hey Arnold! Guide To Relationships and also runs the pop culture blog called "Nostalgia Is The New Black." When she's not writing, she's probably working on a fun jigsaw puzzle.

Mark Morris has written and edited almost forty novels, novellas, short story collections, and anthologies. His recent work includes the official movie novelization of The Predator (with Christopher Golden) and the Obsidian Heart trilogy (Titan Books), new audio adaptations of the 1971 horror movie Blood on Satan's Claw and the M.R. James story A View From a Hill, and a 30th anniversary story collection, Warts And All.

Eddie Robson has written episodes of TV shows including Sarah & Duck, Hollyoaks, The Amazing World Of Gumball, and the Chinese adaptation of Humans. He's written about TV for the New Statesman and SFX, among others. He wrote and created the BBC Radio 4 sitcom Welcome To Our Village, Please Invade Carefully, and the SF novels Tomorrow Never Knows and Hearts Of Oak.

Maggie Serota is a former staff writer for SPIN whose writing has appeared in Billboard, Glamour, Pitchfork, Esquire, Paper magazine, and Village Voice, among others. She lives in New York City with an absurdly charming cat named Cosmo.

Drew Toal lives in San Francisco, California with his wife Stacey and has written for Rolling Stone, NPR, The Daily Beast, Time Out New York, Mental Floss, and many other publications. He currently works at an organization focused on immigration and criminal justice reform. His top three desert island TV shows are Futurama, Top Chef, and Twin Peaks: The Return.

Matthew Turner is a lifelong film and TV fanatic and has been a freelance entertainment journalist for 20 years. He was the film critic for ViewLondon for 14 years and has written for a wide variety of publications, including Empire, Total Film, iNews, and Digital Spy. His favorite film is Vertigo and he hasn't missed an episode of EastEnders since 1998.

Laurie Ulster, who somehow survived her confusing adolescence as the lone female Star Trek fan in middle school, is a transplanted Canadian living in New York. After many years as a TV producer, overseeing everything from interviewing musicians in East Village bars to game shows in Malaysia, she also became a freelance writer, whose favorite subject is - of course - television.

“Even dedicated television hounds are sure to discover something new. Well organized, readable, often humorous, and highly recommended.” —Library Journal