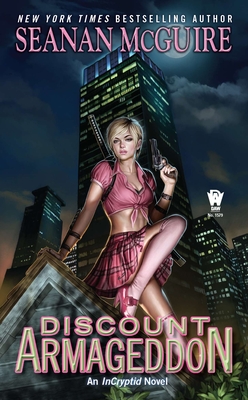 This is book number 1 in the InCryptid series.

First book in New York Times-bestselling Seanan McGuire's witty urban fantasy InCryptid series about a family of cryptozoologists who act as a buffer between humans and the magical creatures living in secret around us.

Cryptid, noun: Any creature whose existence has not yet been proven by science. See also "Monster."

Crytozoologist, noun: Any person who thinks hunting for cryptids is a good idea. See also "idiot."

The Price family has spent generations studying the monsters of the world, working to protect them from humanity—and humanity from them.

Enter Verity Price. Despite being trained from birth as a cryptozoologist, she'd rather dance a tango than tangle with a demon, and is spending a year in Manhattan while she pursues her career in professional ballroom dance. Sounds pretty simple, right?

It would be, if it weren't for the talking mice, the telepathic mathematicians, the asbestos supermodels, and the trained monster-hunter sent by the Price family's old enemies, the Covenant of St. George. When a Price girl meets a Covenant boy, high stakes, high heels, and a lot of collateral damage are almost guaranteed.

To complicate matters further, local cryptids are disappearing, strange lizard-men are appearing in the sewers, and someone's spreading rumors about a dragon sleeping underneath the city...

Seanan McGuire is a Washington State-based author with a strong penchant for travel and can regularly be found just about anyplace capable of supporting human life (as well as a few places that probably aren’t). Early exposure to a vast number of books left her with a lifelong affection for the written word, and led, perhaps inevitably, to her writing books of her own, starting somewhere around the age of eleven. The October Daye novels are her first urban fantasy series, and the InCryptid novels are her second series, both published by DAW and both of which have put her in the New York Times bestseller list. Seanan was the winner of the 2010 John W. Campbell Award for Best New Writer; Rosemary and Rue, the first novel in the October Daye series, was named one of the Top 20 Paranormal Fantasy Novels of the Past Decade; and her novel Feed, written under the name Mira Grant, was named as one of Publishers Weekly's Best Books of 2010. She also won a Hugo for her podcast, and is the first person to be nominated for five Hugo Awards in a single year. You can visit her at www.seananmcguire.com.

Praise for the InCryptid series:

"[Half-Off Ragnarok] is kind of like taking a tour through a very deadly theme park made up of alternating parts awesome and terrifying. Come to think of it, that sums up this series quite nicely.... This book effectively acts as a jumping-on point to those just coming in." —Tor.com

"McGuire creates a sense of wonder and playfulness with her love for mythology and folklore.... Her enthusiastic and fast-paced style makes this an entertaining page-turner." —Publishers Weekly

"A funny, fast-paced and genuinely suspenseful adventure that is sure to engross and entertain.... There is still a wide world for the intrepid Price family to explore, much to readers' guaranteed delight." —RT Reviews

"While chock-full of quality worldbuilding, realistic characters, and a double helping of sass, at its core, Half-Off Ragnarok is a book about judging others according to stereotypes, how nurture can overcome nature, and the importance of family." —Ranting Dragon