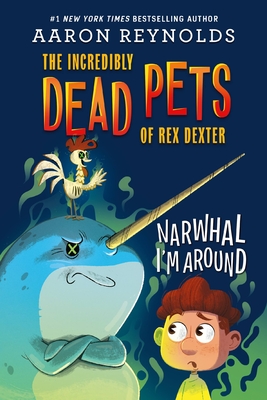 This is book number 2 in the The Incredibly Dead Pets of Rex Dexter series.

This wet, wild, and hilariously illustrated story from a New York Times bestselling author takes readers on a wacky adventure that spirals out of control as soon as our pet hero discovers a narwhal hanging out in his bedroom.

Rex Dexter is cursed . . . with brains . . . and daring . . . and more than his fair share of devilish good looks. But also with an actual curse: dead animals keep showing up in his bedroom, wanting him to solve their murders.

After successfully sleuthing a series of endangered animal assassinations, Rex is pretty sure he's home free, spiritually speaking. But that's when he finds a two thousand pound narwhal in his beanbag chair. And this tough guy is dead. And super crabby about it.

Fishy business is at hand. And as if that's not bad enough, Rex's mom has a stressful new job. His new teacher may be part of a Russian hit squad. His best friend Darvish is distracted by a role-playing game. And, horror of horrors, Rex may accidentally have a girlfriend.

Rex Dexter is neck-deep in dead pet problems. And he's determined to solve them. Or let his best friend Darvish die trying.

Aaron Reynolds is a New York Times bestselling author and has written many highly acclaimed books for kids, including DUDE!, Creepy Pair of Underwear, Caveboy Dave, and the Caldecott Honor-winning Creepy Carrots. Aaron lives in Chicago with his wife, two kids, four cats, and anywhere between zero and ten goldfish, depending on the day.

Praise for The Incredibly Dead Pets of Rex Dexter:
* "In this entertainingly spooky romp, Reynolds tempers his morbid premise with the absurdity of Rex's situation, the ghostly entourage's distinct personalities, and a hilarious, simultaneously formal and sarcastic, narrative voice."—Publishers Weekly, starred review

"The mystery has a twist ending that will surprise and satisfy readers who thought they knew what was coming....Purchase where funny books are popular--that's everywhere, right?"—School Library Journal

"Picture-book author Reynolds brings his knack for off-kilter comedy to his first novel in a gleefully entertaining fashion."—Booklist

"Reynolds is bound to attract fans drawn to overconfident Rex and whatever challenge the Grim Reaper cares to deal him."—BCCB