In Search of Stardust: Amazing Micrometeorites and Their Terrestrial Imposters (Hardcover) 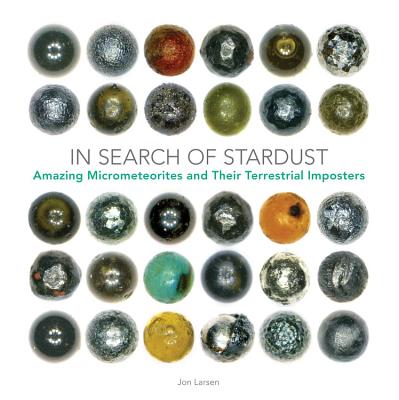 By Jon Larsen
Unavailable. Orders will be auto-cancelled.

Tiny pieces of space rock called micrometeorites are everywhere on Earth. In Search of Stardust shows you how to find them and keep them safe.

The solar system is a dusty place. Every day approximately 100 metric tons of cosmic dust collides with Earth, mainly in the form of micrometeorites. Most of these mineral particles (iron, nickel, etc.) are smaller than grains of sand, and they are falling down on us all the time and all over the globe. Still, little is known about these exotic extraterrestrials.

In Search of Stardust is the first comprehensive popular science book about micrometeorites. It's also a photo documentary comprising more than 1,500 previously unpublished images: the first atlas of micrometeorites, hundreds of which are depicted here in high-resolution color microscopic photography and in scanning electron microscope imagery.

Author Jon Larsen shows readers how and where to look for micrometeorites, explains the history of micrometeoritics, and offers chapters about micrometeorite formation, classification, and analysis. Thanks to Larsen's work, for the first time it is now possible for anyone to find these amazing tiny stones from space.

For more than a century it was believed these incredible space objects could be found only in pristine, unsullied environs like Antarctica and ocean floors. Larsen became the first to break the code and find micrometeorites in populated areas -- in fact, they can be found in the nearest rain gutter. In the book Larsen explains how anyone with a bit of inexpensive equipment can find their own micrometeorites.

It was recently discovered that King Tut's dagger was forged from a chunk of a meteorite. What else is made of extraterrestrial rock? Join the hunt!

A guitarist, composer, record producer, and painter, Jon Larsen began researching micrometeorites in 2009. His breakthrough came in February 2015 with the verification of the world's first micrometeorite discovered in a populated area. In January 2016, Dr. Matthew Genge at the Natural History Museum in London evaluated and verified Jon Larsen's collection of "urban micrometeorites." His first book on the subject In Search of Stardust is an international bestseller. Larsen resides in As, Norway.

"this book is worth buying for the pictures alone: it is a fantastic aid to micrometeorite hunters!"—Dr Penny Wozniakiewicz, BBC Sky at Night magazine

In Search of Stardust is a visual extravaganza...and will undoubtedly wow you. —Physics World