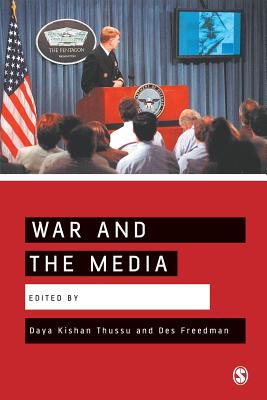 No book is more timely than this collection, which analyses brilliantly the Western media′s relentless absorption into the designs of dominant, rapacious power′ - John Pilger

A most timely book, with many valuable insights′ - Martin Bell O.B.E

It has long been known that the outcome of war is deeply influenced by the battle to win ′hearts and minds′. This book provides a stimulating set of perspectives which combine the analyses of prominent academics with the experiences of leading journalists′ -

This volume represents an all-star cast of authors who have a tremendous amount of knowledge about media and world conflict. One of its strengths is that it doesn′t focus entirely narrowly on media, but puts the discussion of media issues in the context of changes in the world order in military doctrine′ -

This book comes just in time. A coherent and wide-ranging collection of data, analyses and insights that help our understanding of the complex interaction between communication and conflict. A major intellectual contribution to critical thinking about the early 21st century′ - Cees J Hamelink, Professor International Communication, University of Amsterdam

With what new tools do governments manage the news in order to prepare us for conflict?

Are the media responsible for turning conflict into infotainment?

How do journalists view their role in covering distant wars?

This book critically examines the changing contours of media coverage of war and considers the complexity of the relationship between mass media and governments in wartime.

Assessing how far the political, cultural and professional contexts of media coverage have been affected by 9/11 and its aftermath, the volume also explores media representations of the War on Terrorism′ from regional and international perspectives, including new actors such as the Qatar-based Al-Jazeera - the pan-Arabic television network.

One key theme of the book is how new information and communication technologies are influencing the production, distribution and reception of media messages. In an age of instant global communication and round-the-clock news, powerful governments have refined their public relations machinery, particularly in the way warfare is covered on television, to market their version of events effectively to their domestic as well as international viewing public.

Transnational in its intellectual scope and in perspectives, War and the Media includes essays from internationally known academics along with contributions from media professionals working for leading broadcasters such as BBC World and CNN.