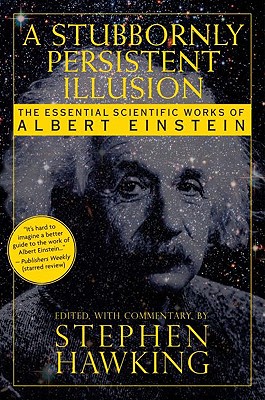 With commentary by the greatest physicist of our time, Stephen Hawking, this anthology has garnered impressive reviews. PW has called it "a gem of a collection" while New Scientist magazine notes the "thrill of reading Einstein's own words." From the writings that revealed the famous Theory of Relativity, to other papers that shook the scientific world of the 20th century, A Stubbornly Persistent Illusion belongs in every science fan's library.

Stephen Hawking was one of the most highly celebrated and recognized scientists who has ever lived. He first came to mainstream prominence with the publication of A Brief History of Time, and followed with a second triumph, The Universe in a Nutshell, and most recently, The Grand Design. The media has called Hawking "the most intelligent man in the world today" and "the scientific heir to Einstein, Newton, and Galileo." He lived in Cambridge, England.