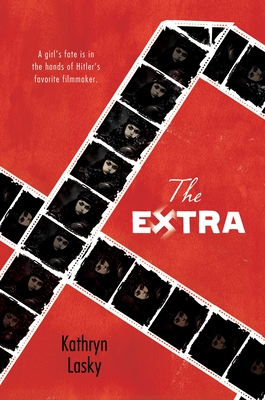 Is the chance to serve as an extra for Hitler’s favorite filmmaker a chance at life — or a detour on the path to inevitable extermination?

One ordinary afternoon, fifeen-year-old Lilo and her family are suddenly picked up by Hitler’s police and imprisoned as part of the "Gypsy plague." Just when it seems certain that they will be headed to a labor camp, Lilo is chosen by filmmaker Leni Riefenstahl to work as a film extra. Life on the film set is a bizarre alternate reality. The surroundings are glamorous, but Lilo and the other extras are barely fed, closely guarded, and kept in a locked barn when not on the movie set. And the beautiful, charming Riefenstahl is always present, answering the slightest provocation with malice, flaunting the power to assign prisoners to life or death. Lilo takes matters into her own hands, effecting an escape and running for her life. In this chilling but ultimately uplifting novel, Kathryn Lasky imagines the lives of the Gypsies who worked as extras for the real Nazi filmmaker Leni Riefenstahl, giving readers a story of survival unlike any other.

Kathryn Lasky has written award-winning books for children across all genres, including the Newbery Honor book Sugaring Time and the New York Times best-selling series The Guardians of Ga’Hoole. She is also the author of the novel Chasing Orion and numerous illustrated nonfiction titles. Kathryn Lasky lives in Massachusetts.

Lasky delivers a well-researched and uncompromising standalone novel focusing on the Nazi genocide of the Roma and Sinti peoples. ... Lasky’s novel is thorough in its attention to detail, mixing facts like Riefenstahl’s awful behavior toward her charges with the horrific lives of the fictional characters. … [B]etween the constant, appalling brutality of the camps and Lilo’s growth over the years, Lasky draws remarkable depth, realism, and even charm out of a bleak story.
—Publishers Weekly

Lasky’s introduction of a historical character, who really was Hitler’s favorite filmmaker, gives a unique twist to an otherwise oft-told tale. Her characters are well realized, as well... Touches of humor provided by a camp-smart boy offer a little relief. Above all, Lasky’s accessible style balances the grim realities of a Nazi camp with a girl’s enduring will to survive — a girl who comes of age among some of history’s greatest horrors.
—VOYA

Lasky has written a harrowing and deeply moving novel that focuses attention on a seldom-told story of the Nazis’ attempt to exterminate the Romani people. Thoroughly researched and insightful, the book is ideal for classroom use and discussion.
—Booklist

The war’s Gypsy genocide is undertreated in literature for youth, and this brings the plight of the Zigeuner during the Holocaust (or, in their terms, the devouring) into sharp relief; the irony of the layers of deception and fiction that drove the Nazi regime will not be lost on YA readers.
—Bulletin of the Center for Children's Books

Inspired by actual events, Lasky’s intense novel exposes readers to the atrocities endured by Gypsies during World War II, specifically those who worked on the film Tiefland. ... [The story] convey[s] the horrors she witnesses with frightening clarity.
—School Library Journal

Exposing the experiences of non-Jews at the hands of the Nazis, Lasky spotlights a group that is rarely focused on. Lilo also experiences medical experiments, and she discovers that both good and bad Nazis exist. This book is a welcomed addition to any children’s history collection. The ability to see the Holocaust from another point of view is also a benefit, showing that it was not only the Jews who were interned and exterminated.
—Library Media Connection

This is a Holocaust narrative that is rarely told and Lasky delivers with a deft hand, powerfully and poignantly. The mix of actual history and fictional protagonist works seamlessly. ... This is absolutely a book worth reading and discussing.
—Jewish Book World