Judy Moody: Around the World in 8 1/2 Days (Hardcover) 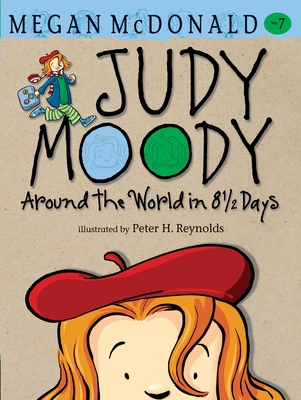 This is book number 7 in the Judy Moody series.

A brand-new friend and a big class project put Judy in an international mood in this comical adventure.

Judy Moody cannot believe her ears. There at the lunch table, a girl called Amy Namey is interviewing Judy's best friends, Rocky and Frank. Even worse, Amy is dressed like Nellie Bly, daredevil woman reporter, much like Judy's emulation of a certain woman doctor. Is this clipboard-carrying girl destined to be Judy's new best enemy? Or new best friend? Judy Moody finds some unexpected potholes on the path to friendship as Class 3T takes a whirlwind tour of the globe, investigating everything from tooth-brushing sticks in Yemen to an Italian "spider dance" along the way. Fans will cheer as Judy finally masters the challenge of making new friends and keeping the old — for sure and absolute positivo!

Reader-friendly format, on-target humor, and convincing depictions of third-graders in action at school and at home.
—Booklist

This book gives a humorous and familiar peek at the world through the eyes of a precocious third grader. It is filled with original, yet true-to-life characters who will make readers wish for a friend like Amy. The silly rhymes and wordplay are the perfect humor for young readers. Pen-and-ink cartoons add to the fun. An entertaining journey that will have easy-chapter-book readers lining up for the trip.
—School Library Journal