A Monster Calls: Inspired by an idea from Siobhan Dowd (Hardcover) 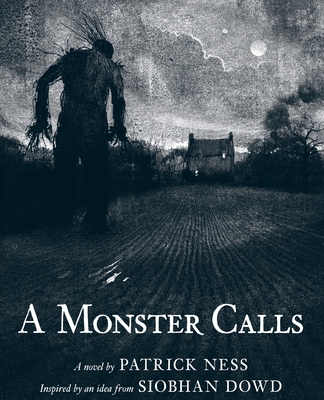 By Patrick Ness, Jim Kay (Illustrator)
$22.99
Not available to order.

An unflinching, darkly funny, and deeply moving story of a boy, his seriously ill mother, and an unexpected monstrous visitor.

At seven minutes past midnight, thirteen-year-old Conor wakes to find a monster outside his bedroom window. But it isn’t the monster Conor’s been expecting – he’s been expecting the one from his nightmare, the nightmare he’s had nearly every night since his mother started her treatments. The monster in his backyard is different. It’s ancient. And wild. And it wants something from Conor. Something terrible and dangerous. It wants the truth. From the final idea of award-winning author Siobhan Dowd – whose premature death from cancer prevented her from writing it herself – Patrick Ness has spun a haunting and darkly funny novel of mischief, loss, and monsters both real and imagined.

Patrick Ness is the author of the critically acclaimed and best-selling Chaos Walking trilogy. He has won numerous awards, including the Guardian Children’s Fiction Prize, the Booktrust Teenage Prize, and the Costa Children’s Book Award. Born in Virginia, he lives in London.

Siobhan Dowd spent twenty years as a human rights campaigner for PEN and Amnesty International before her first novel, A Swift Pure Cry, was published in 2006. She won the Carnegie Medal posthumously in 2009 after her death at the age of forty-seven.

Jim Kay studied illustration and worked in the archives of the Tate Gallery and the Kew Royal Botanic Gardens, two experiences that heavily influence his work. His images for A Monster Calls use everything from beetles to breadboards to create interesting marks and textures. Jim Kay lives in Edinburgh, Scotland.

There’s no denying it: this is one profoundly sad story. But it’s also wise, darkly funny and brave, told in spare sentences, punctuated with fantastic images and stirring silences. Past his sorrow, fright and rage, Conor ultimately lands in a place — an imperfect one, of course — where healing can begin. A MONSTER CALLS is a gift from a generous story­teller and a potent piece of art.
—The New York Times

A nuanced tale that draws on elements of classic horror stories to delve into the terrifying terrain of loss. . . . Ness brilliantly captures Conor’s horrifying emotional ride as his mother’s inevitable death approaches. In an ideal pairing of text and illustration, the novel is liberally laced with Kay’s evocatively textured pen-and-ink artwork, which surrounds the text, softly caressing it in quiet moments and in others rushing toward the viewer with a nightmarish intensity.A poignant tribute to the life and talent of Siobhan Dowd and an astonishing exploration of fear.
—Kirkus Reviews (starred review)

Ness twists out a resolution that is revelatory in its obviousness, beautiful in its execution, and fearless in its honesty. Kays artwork keeps the pace, gnawing at the edges of the pages with thundercloud shadows and keeping the monster just barely, terribly seeable.
—Booklist (starred review)

A masterpiece about life and loss that will stay with the reader long after the final page is turned.
—Library Media Connection (starred review)

The heavily textured monochromatic illustrations are silent screams, rendering Conor's inner chaos palpable with dense shading and jagged edges symbolizing the wildness within while shifting perspectives alternately create intimacy and distance, like the push and pull he feels as he tries to stay engaged in an impossibly painful situation… Emotionally wrenching, this draws truth across pain in a way that is accessible to middle-school readers.
—Bulletin of the Center for Children's Books

Heart-wrenching and thought-provoking.
—The Horn Book

The power of this beautiful and achingly sad story for readers over the age of 12 derives not only from Mr. Ness's capacity to write heart-stopping prose but also from Jim Kay's stunning black-ink illustrations. There are images in these pages so wild and ragged that they feel dragged by their roots from the deepest realms of myth.
—Wall Street Journal

The monster is a brilliant creation — part giant, part yew tree, destructive, didactic, elemental...The book has the thrills and ambition you would expect from the author of the Chaos Walking trilogy...Ness, Dowd, Kay and Walker have rifled death's pockets and pulled out a treasure.
—The Guardian

An honest, heart-wrenching story that moved me to tears.
—John Boyne (author of The Boy in the Striped Pyjamas)