Judy Moody and the NOT Bummer Summer (Hardcover) 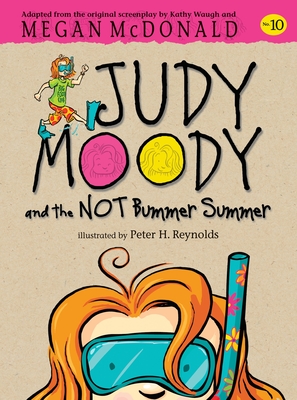 This is book number 10 in the Judy Moody series.

Megan McDonald’s story — as featured in Judy’s uber-cool movie — is back in a must have edition illustrated by Peter H. Reynolds. RARE!

Roar! It’s not bad enough that Mom and Dad are heading to California, leaving Judy and Stink with Aunt Awful (er, Opal), but now two of Judy’s friends are going Splitsville, too. Just when it looks like her summer is going to be BOR-ing- eureka! — Judy comes up with the most thrill-a-delic plan ever. Get ready for a race involving tightrope walking, Scream Monster riding, and way more! Add in a treasure hunt for Judy’s teacher, a midnight stakeout, a runaway ice cream truck, and a dash of Bigfoot, and what have you got? The Judy Moodiest summer ever!

Megan McDonald is the creator of the popular and award-winning Judy Moody and Stink series. She is also the author of three Sisters Club stories, Ant and Honey Bee: A Pair of Friends at Halloween, and many other books for children. She lives in Sebastopol, California.

Peter H. Reynolds is the illustrator of the Judy Moody and Stink books and the author-illustrator of The Dot, Ish, So Few of Me, and Rose's Garden. He lives in Dedham, Massachusetts.

We're not especially up on just what is cool among third-graders these days. But those who are — or at least who have kids who are — extol the Judy Moody children's book series and its popularity among the schoolkids
—24 Frames (LA Times Blog)